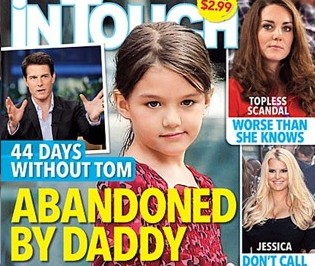 Tom Cruise’s libel suit against Bauer Media Group is heating up, as a California court is set to determine whether the German publishing giant will be forced to disclose the extent of its connections to the Nazis.

According to court papers filed Monday in U.S. District Court in Los Angeles, a Nov. 26 discovery hearing was scheduled to figure out whether Bauer will be forced to reveal:

>> Details about possible pro-Nazi leanings of some of its publications;

>> Whether members of the Bauer family owned companies that sold Nazi-themed pornography;

>> And whether any Bauer family members may have belonged to the Nazi party.

In turn, Bauer is asking for Cruise’s team to reveal its dealings with the media, and wants the court to toss out his discovery motions, which it calls irrelevant.

Cruise is taking this fight to Bauer after its U.S. tabloid publications Life & Style and In Touch ran headlines in 2012 claiming he had “abandoned” his daughter Suri — which the “Mission: Impossible” actor vehemently denies. According to court papers, Cruise will ask the court to compel Bauer to admit it has no anonymous sources to back up that reporting.

Bauer says in the filing that it has no editorial control over Life & Style or In Touch, but that Cruise’s legal team launched a massive campaign to prove otherwise, including allegations of Nazi sympathies the publisher says are “utterly irrelevant to the issues in this lawsuit, patently offensive, grossly overbroad and are designed for only one purpose: to harass and smear the Defendants.”

As TheWrap reported in February, Bauer Media Group is behind several questionable publications that appear sympathetic to Nazis. One, Der Landser, stopped publication after a Jewish human rights group demanded a government inquiry into whether the publication broke German law — though Bauer said the decision was simply an effort to “evaluate the company’s portfolio strategy.” Bauer also named TheWrap as one of Cruise’s lawyers’ sources.

“The very same day Cruise had agreed in advance with the Bauer Defendants to publicly file their Joint Rule 26(f) Report (the “Report”), an entertainment-news website called The Wrap published two articles and a slideshow that parroted Cruise’s allegations about Bauer’s ‘Nazi ties,’ and conveniently quoted statements from Cruise’s section of the Report,” the filing said.

Cruise’s lawyers contend that by proving Bauer has a history of anti-Semitism through publications such as Der Landser and Geschichte & Wissen, which TheWrap highlighted in its own report, it will show the publisher has an intolerance toward minority religions in general. Cruise, a devout Scientologist, believes he is being targeted for his faith.

Pamela Chelin contributed to this report

Did The CIA Have More Motive than Oswald?