A Sneaky Lie that Left 750,000 Floridians Without Health Coverage 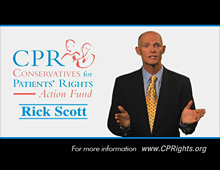 They lied to you. Not a big, bald-faced lie. Not a get-a-load-of-this lie. It was more of a sneaky lie. The kind of lie that sounds sincere when it’s told, and doesn’t register as the most dangerous of deceits until it is too late.

In short, your state leaders lied when they told you they would come up with an alternative to Medicaid expansion.

You remember that, right?

Back when Gov. Rick Scott said he couldn’t in good conscience deny health care to uninsured residents during the three years the federal government was footing the entire bill? Back when the Senate came up with a plan to use Medicaid funds to purchase private insurance for the poorest of poor among us? Back when the House rejected federal funds of any kind?

“If we’re going to say ‘no’ to Medicaid expansion, let’s say “yes’ to something,” Sen. Joe Negron, R-Stuart, said more than a year ago.

“There’s a desire to do the right thing and try to find a way to provide a safety net for this population that works,” Rep. Richard Corcoran, R-Land O’Lakes, said around the same time. “There’s all kinds of things we can look at.”

“We will stand up to their inflexible plan and we’ll work on our own solution, one that better reflects the needs and priorities of our state,” Rep. Will Weatherford, R-Wesley Chapel, said in a speech some 13 months ago.

Yet the House and Senate made it through the entire 2013 legislative session without a solution. And with the 2014 session soon to end, they’ll be on a two-year useless streak.

What’s worse? This time, they didn’t even try.

But the 750,000 or so Floridians without health insurance never came up.

Instead, they poked fun at Obamacare’s ragged rollout.

At this point, Republican leaders in Florida don’t even want to debate health care beyond their misleading television ads and discredited talking points. They’re just hoping that voters aren’t paying close attention in an election year.

Once upon a time, your state leaders also promised to seek solutions.

Not just for the unfortunate people who can’t afford health coverage, but for everyone else whose medical and insurance costs are inflated because hospitals are on the hook for all of those unpaid bills.

Your state leaders said they would work on a plan.

Apparently the gist of that plan was to deceive you.