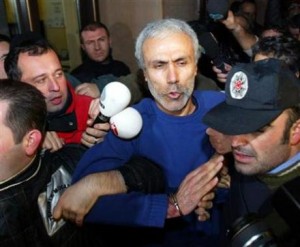 ISTANBUL (Reuters) - The man who tried to kill Pope John Paul II called for a "new American Empire" championing peace and democracy in a rambling statement issued by his lawyers Wednesday before his release from prison next week.

Former far-right gangster Mehmet Ali Agca served 19 years in an Italian prison for the 1981 assassination attempt before being pardoned at the pope's behest in 2000 and extradited to serve time for other crimes in his native Turkey.

"The world needs a new American Empire that must become the center of and the leader of international democracy, peace and freedom," Agca wrote.

Following his scheduled release on January 18, Agca said he would answer questions on the attack in the coming weeks. ...

There has been talk of possible book and film deals on Agca's experience.

Since his extradition to Turkey, he has served time in an Istanbul jail for the 1979 murder of liberal newspaper editor Abdi Ipekci and other charges dating from the 1970s.

"Terrorism is the Evil of Devil. All religions prohibit and condemn terrorism. The al Qaeda is a psychopathic criminal Nazi organization," Agca wrote in an open letter issued by his lawyers.

Wednesday's statement also called for President Barack Obama to live up to the Nobel Peace Prize, which he accepted last month.

He has described himself in the past as being of no political orientation but is known to have been a member of the far-right Turkish Grey Wolves group.

In the past he has also claimed to be the Messiah and according to recent media reports has said he would proclaim the end of the world, raising questions about his mental health.