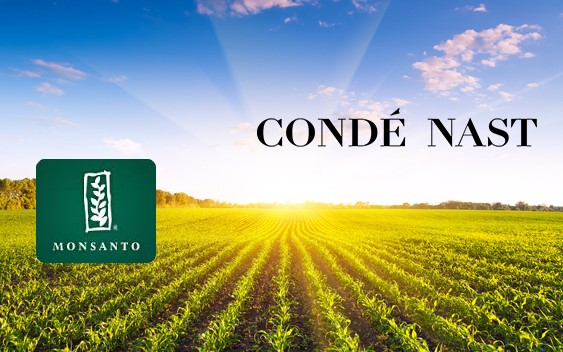 According to new information from the Organic Consumers Association, Monsanto is partnering with media conglomerate Condé Nast to help spread its message. Condé Nast is the publisher of such magazines and sites as: Vogue, Vanity Fair, GQ, Wired, Golf Digest, The New Yorker, Bon Appetit, Self, Reddit, Architectural Digest, Allure, Brides, and many others.

According to the Organic Consumers Association, “On August 5, Gawker published an email from Condé Nast outlining plans for a Monsanto-sponsored TV panel on ‘food, food chains and sustainability,’ featuring celebrity chef Mo Rocca.

Rocca contacted Gawker the next day saying that yes, he had been pitched that project, but before he could say yes or no, a letter went out suggesting he was signed on. ‘That’s not the case. I’m not involved with it,’ Rocca said.”  And, so Monsanto continues to seek a celebrity chef to back its message.

Gawker also published a confidential joint memo between Condé Nast and Monsanto.  According to Gawker, the memo read:

“The Condé Nast Media Group is producing, showcasing and distributing a Monsanto sponsored film series entitled “A Seat at the Table” (working title). Hosted and moderated by a well-known media figure, each episode will feature an eclectic mix of industry and non-industry notables with diverse viewpoints about food in this country. Guests from all walks of life (two guests and one Monsanto expert per episode) will be encouraged to engage in spirited conversation…”

This raises numerous concerns for me:

1)  Is Monsanto just trying to buy its way into mainstream media via Condé Nast to promote genetically-modified foods?

2)  Which celebrity chef will step up to be the spokesperson for Monsanto given its reputation?  After all, a quick Google search on Monsanto shows the most popular search term linked to the company is “Monsanto Evil.”

3)  What does Monsanto know about food and sustainability, considering its lengthy history as the maker of genetically-modified seed and foods resulting from it–the foods research links to serious illnesses and environmental degradation?

4)  Maybe Monsanto needs to take “a Seat at the Table” of public opinion surrounding its genetically-modified food rather than attempting to inform us about its warped vision of sustainable food and its one-sided message.

If you’re not familiar with Monsanto and its designs on the food supply check out my earlier articles:

Monsanto is Messing with Animals’ Sperm

Previous Article
America’s Recruitment of Nazis -– Then and Now
Next Article
Brainwashed, Sexually Abused from the Age of Four — Growing Up in the Children of God Cult