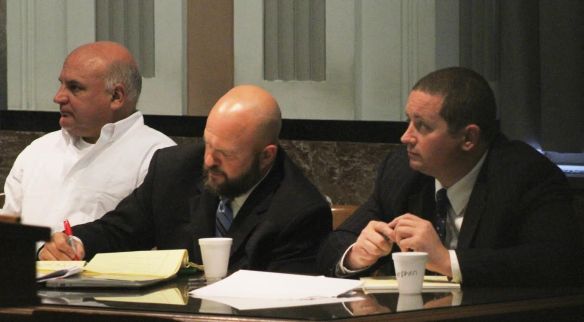 OKLAHOMA CITY – Right-wing political activist Al Gerhart doesn’t hold much, if anything, back. He’s straightforward and, oftentimes, lacks tact, but he’s not ashamed of his methods.

As leader of the Sooner Tea Party, Gerhart has an agenda and he intends to pursue his political goals despite the cost. For Gerhart, that resulted in two felony convictions earlier this week when an Oklahoma County jury found him guilty of blackmail and violating the state’s Computer Crimes Act based on a threatening email sent to state Sen. Cliff Branan (R-Oklahoma City) in March 2013.

The jury refused to recommend any prison time. Instead, they fined Gerhart $1,000 on the blackmail conviction and gave him no sentence on the Computer Crimes Act violation.

Gerhart’s attorneys argued during the trial that his words and actions are protected by the First Amendment’s free speech provision. He also doesn’t apologize for his brash comments and behavior to Oklahoma’s politicos.

“Absolutely not,” Gerhart said, when asked if he regretted his tactless approach toward state lawmakers.

Gerhart and his legal team aren’t alone with their constitutional concerns.

Reaction to the verdicts among notable Oklahoma City attorneys was unanimous in two ways. First, they believe Gerhart’s words were too harsh, yet they support his First Amendment right to make those comments. “It was a compromised verdict,” said defense attorney David Slane. “Obviously, the jury didn’t like what he did and thought he crossed the line of advocacy and threats. At the same time, no jail time is an indication the jurors thought this is not the type of case we need to put our resources into.”

Gerhart admitted he sent the email, which demanded passage of a bill that focused on a United Nations plan. Branan, chairman of the Senate Energy and Environment Committee, refused to hear the measure.

“Branan, Get that bill heard or I will make sure you regret not doing it. I will make you the laughing stock of the Senate if I don’t hear that this bill will be heard and passed. We will dig into your past, your family, your associates, and once we start on you there will be no end to it. This is a promise.”

Branan did not return a phone call for comment.

Slane questioned if the verdicts will encourage further prosecutions of people who protest a lawmaker’s decision. “It has a tremendous impact on people’s ability to criticize public officials. I’m not sure I know what a threat is after this case,” he said. “Obviously, people can still be critical of a legislator’s vote, but they will have to select their words more carefully. Any time you affect a person’s right to speak in the political process it’s a huge deal.”

Ryan Kiesel, executive director of the American Civil Liberties Union (ACLU) of Oklahoma, said the Gerhart case presents serious First Amendment issues. “We have to be careful in criminalizing political speech in particular, even if that political speech is overwhelming and might be found to be distasteful or out of line. At its core, it seemed like the email promised political retaliation, but that is not something that is unfamiliar in politics,” he said. “Mr. Gerhart may have had a poor strategy and poor tact, but that doesn’t make you a criminal.”

Kiesel, a former Oklahoma lawmaker, said he often received threatening emails while in public office. “I had any number of people say or write ‘if you don’t do X, I will make sure you don’t get re-elected,’” he said.

“The First Amendment does not protect threats of violence, but reasonable people could draw different conclusions about Mr. Gerhart’s email. I think we should err on the side of free speech.”

Ken Paulson, president of the First Amendment Center in Nashville, Tenn., said the Gerhart case borders on a fine line between expressions of political activity and criminal behavior. “It falls into a gray area and it’s hard to tell what was intended (in the email),” he told Red Dirt Report in a telephone interview Friday.

“Saying you’re going to dig into someone’s past is not actionable. The question the jury had to deal with was it an illegal threat or an admonition to do the public’s work. It’s a slippery slope. On its face, it doesn’t feel like pure political speech.”

However, Paulson agreed the verdict could have a chilling effect on people who might criticize lawmakers in the future.

Gerhart has been back at work since Wednesday’s verdict, but he and his attorneys are planning to appeal the convictions based on the “overly broad” way the blackmail statute is written.

“We needed to lose to strike this down,” the Sooner Tea Party chief said Friday. “There will be one issue on appeal and that is the law is overly broad and unconstitutional. I had every right to say what I did.”

A judicial review of Oklahoma’s blackmail law is critical for the First Amendment and its proper place in the political process, Kiesel said. “Lawful political speech can get caught up in a statute that is meant to be more black and white,” he noted. “The message to others is the line between aggressive political speech and criminal blackmail is so undefined that it may very well chill legitimate political engagement.”

Taking the situation a step further, Kiesel suggested the unintended consequences of Gerhart’s convictions could dissuade people from making any political commentary.

“Unless it (blackmail statute) is overturned on appeal, every politician and political candidate in Oklahoma just got a new weapon to use against people who would seek to hold them accountable as an elected official,” he said.

Despite the convictions, Gerhart is moving forward with his political battles, fully aware all eyes will be on his future comments and actions. Gerhart wants citizen grand juries led by independent prosecutors to investigate some of Oklahoma’s lawmakers and district attorneys.

Tim Farley is an award-winning journalist with more than 30 years of experience, including coverage of police, courts, politics, business, education and religion. He worked as a sportswriter and news reporter at The Daily Oklahoman and as assistant city editor at the Birmingham Post-Herald in Alabama.