DoD CONTRACTOR AIRTECH, A BIG ROHRABACHER CONTRIBUTOR, IS UNDER INVESTIGATION FOR FRAUD 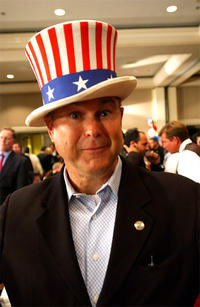 U.S. Congressman Dana Rohrabacher (R-Huntington Beach) likes to help out his friends when he sees their names being dragged through the mud.

When his Capitol Hill dining buddy, disgraced lobbyist Jack Abramoff, pleaded guilty to felony fraud charges last year, Rohrabacher, who took trips abroad with members of Abramoff’s firm, became the only congress person to beg for leniency for his pal. “I think he’s been dealt a bad hand and the worst, rawest deal I’ve ever seen in my life,” Rohrabacher whined.

So it seems just a little bit odd that Rohrabacher has yet to utter a word in defense of his close friends at Airtech International, Inc., an aerospace firm in his district that is currently being investigated for fraud by the U.S. government. Airtech might well expect a kind word or two: In the past few decades, Airtech and its employees and their families have donated at least $36,650 in campaign contributions to Rohrabacher, making the company his fourth-largest campaign contributor during his entire career.

Airtech, which is based in Huntington Beach, makes materials that are used in building composite parts for everything from commercial aircraft to submarines, military jets and the Space Shuttle. Because of the sensitive nature of building composite materials—if improperly built, composite materials subjected to extreme physical demands might fracture, say, during flight—every step in their manufacture is subject to stringent guidelines.

In April of this year, the anti-Airtech drumbeat began when CBS news reported that Airtech had shipped poor-quality materials to a variety of defense and aerospace firms and other clients, including the U.S. military, between 1997 and 2005. CBS based that allegation on a U.S. Army Criminal Investigation Command investigation, which alleged massive fraud by Airtech.

On Sept. 25, 2006, after a four-year investigation, an Army investigator whose name was blacked out wrote a memorandum, obtained by the Weekly, that outlines the charges against the company. “During our four year investigation of Airtech, allegations of fraudulent acts by Airtech have come from numerous reliable sources,” the letter states. “At one time or another, Airtech has supplied some form of nonconforming product to every aircraft manufacturer in the world.”

The memorandum lists several specific, if mind-numbingly technical alleged violations by Airtech.“In my career investigating allegations of fraudulent acts against the DOD, seldom have I come across a company with such brazen disregard for the safety of soldiers and civilians as well as for the sanctity of laws, rules and regulations,” the letter concluded. A month later, the Federal Aviation Administration (FAA) notified Airtech that it was investigating the company. But on Oct. 20, 2006, the FAA told Airtech it had found no wrongdoing. “This letter is to inform you that our investigation has not established a violation,” the FAA stated, “and you may consider this matter closed.”

An Airtech spokesperson directed the Weekly to a statement posted on the company’s website denying any wrongdoing and pointing out that the FAA had vindicated them. “Airtech has faithfully, responsibly, and proudly served civilian and military personnel,” the letter stated. “We stand by our products and reputation, and remain committed to the high level of quality and service that we have provided to our customers for more than 35 years.”

Because of the two diverging reports on Airtech, the House Transportation Committee requested that the U.S. Office of the Inspector General conduct its own investigation, which is ongoing. “They are still investigating,” said Leila Kahn, a committee staffer. “Essentially, what we asked them to do is look at how two agencies could look at the same set of data and come up with widely different conclusions.”

Although the CBS report on Airtech was based mostly on the conclusions of the Army investigation, the news network also received help from the Project on Governmental Oversight (POGO), a Washington, D.C.-based non-profit group that monitors public- and private-sector corruption and originally uncovered the Army memorandum. Jake Wiens, a POGO investigator, said that POGO was concerned about the allegations against Airtech because the company provides material to commercial airplane manufacturers such as Boeing.

“The biggest danger is that Airtech makes parts that are used for the manufacturing of composite materials,” Wiens said. “If you are substituting these parts, that’s illegal, but also, potentially you can get contaminants into the composite parts which can cause peeling of composites and ultimately, serious safety issues.”

A former POGO investigator, Nick Schwellenbach, stated that his organization began investigating Airtech when a whistle-blower approached his group. He also stated that Rohrabacher had been made aware of the allegations well before CBS aired its report. (Tara Setmayer, Rohrabacher’s press spokeswoman, did not respond to an interview request for this story.)

“I know there were at least two letters sent to Dana Rohrabacher,” Schwellenbach said. “It appears a Rohrabacher staffer contacted the military and asked if an investigation was going on, but I don’t know that he did anything else.”

Noting that Airtech is among Rohrabacher’s top five all-time campaign contributors, Schwellenbach said that didn’t surprise him. “He’s a recipient of tens of thousands of dollars of donations from [Airtech],” he said. “It’s not in his interest to do anything.”