AC Note: Asia Energy, as the company is known in Bangladesh, has officially changed its name to Global Coal Management, and subsequently GCM Resources plc.

Circumstances of the name change and summary of Asia Energy’s operations in Bangladesh, from Wikipedia:

On the 30th August 2006 the Guardian newspaper reported that six protesters had been shot dead, allegedly by paramilitary forces, when a crowd of 30,000 people stormed the local offices of Asia Energy. On the 31st August 2006 the Scotsman newspaper reported further unrest the day after the shootings when widespread half day strikes were organised. The Bangladesh government has placed a ban on further protests at the mine site. Gary Lye, chief executive of Asia Energy Corporation (Bangladesh) Pty Ltd, is quoted as saying “It is up to the authorities to determine exactly what happened, but it would appear that the unforgivable events and the needless loss of life and suffering that took place yesterday in Phulbari are entirely the fault of the organisers (of the protest).

Asia Energy has since had its right to mine in Bangladesh withdrawn. …

After the fatal shootings, on 11 January 2007 Asia Energy changed its name to Global Coal Management PLC at the same time as maintaining that it was ‘fully committed to the Phulbari Coal Project in Bangladesh”.

The AIM-listed company has subsequently changed its name to GCM Resources plc, and has invested in coal and uranium projects in other countries. The Asia Energy name is still used in Bangladesh.

A serious concern of open pit mining is its environmental impacts. The method requires the mine area to be completely dewatered so that the hollow of the mine does not get immersed in water. Large pumps are required to suck out underground water around the mine round-the-clock during the entire lifetime of the project. Asia Energy’s solution is to distribute the water pumped out among the farmers, but in Bangladesh, problem of arsenic contamination is severe.

According to a high official in Asia Energy, topsoil will be removed and preserved once the mining operation begins in a particular block. Topsoil will be brought back and spread on the top of the area filled in. But no one can say when the land becomes cultivable again. The other question is: will the company fill the hollow with the same care as it is done in the developed countries? 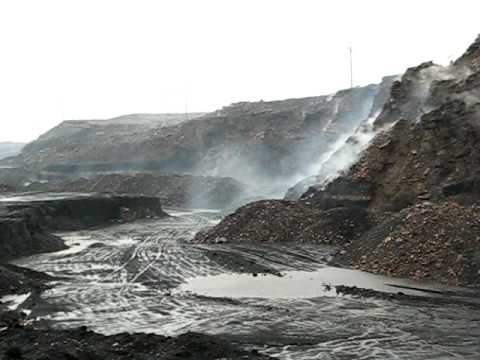 Thousands of Bangladeshi are planning a March 28th protest continuing a decade-long battle to halt a British-owned open-pit coal mine there. Will the Bangladesh government honor a coal ban agreement from 2006 or will it allow the mine to re-open?

And why is the Obama administration covertly pushing for the mine to re-open when it’s been internationally condemned and would displace an 100,000-200,000 villagers, while ravaging desperately needed farm land and water resources?

The short answer, from US Ambassador James Moriarty’s leaked memos: “Asia Energy, the company behind the Phulbari project, has 60% US investment. Asia Energy officials told the Ambassador they were cautiously optimistic that the project would win government approval in the coming months.”

Two years ago, an independent review of the coal mine by a British research firm warned:

“Phulbari Coal Project threatens numerous dangers and potential damages, ranging from the degradation of a major agricultural region in Bangladesh to pollution of the world’s largest wetlands. The project’s Summary Environmental Impact Assessment, and its full Environmental and Social Impact Assessment are replete with vague assurances, issuing many promises of future mitigation measures.” 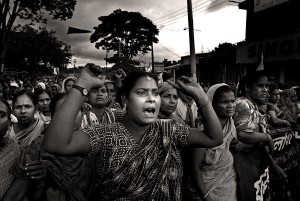 … In light of disturbing WikiLeaks cables, American and worldwide human rights and environmental organizations will also be questioning why the Obama administration is covertly pushing for Bangladesh to reverse course and acquiesce to an internationally condemned open-pit mine that will displace an estimated 100,000-200,000 villagers and ravage desperately needed farmland and water resources.

… The Phulbari coal mine is nothing less than a “humanitarian and ecological disaster.”

I did this interview with Paula Palmer, Director of the Global Response Program for Cultural Survival, to get the backstory on this growing international crisis and CS/IAP’s letter-writing campaign. …

[Paula Palmer:] The project would forcibly displace over 100,000 people from their homes and their farms without offering them equivalent land in exchange, and reduce access to water for another 100,000 people (possibly forcing them to eventually leave their homes and farms). Among the potentially displaced are Indigenous peoples of more than 20 ethnicities who trace their ancestry in the region back 5,000 years. Clearly this forced displacement is the cause of the greatest public outcry against the project, but there are other reasons. The project will also contaminate the air and the water, destroy productive farmland in a country where nearly half the population is undernourished, and threaten the biologically and economically valuable marine and terrestrial life in the Sundarbans mangrove forest.

JB: The government must make a final decision by June. Do you foresee any compromise or canceling of the proposal?

PP: India and Bangladesh just signed an agreement for India to purchase electricity from the Phulbari coal-fired power plant, which seems to indicate a thumbs up for the project. But in the next week we are going to be seeing huge protests again, intensifying the pressure on the government. And international support for the protesters is growing too. Environmental and human rights organizations from the US, Canada, the UK, and India are now urging the government to abandon the project. The government also knows that we are monitoring its handling of the protests and its treatment of protesters for human rights abuses. How can it impose such a project against the will of tens of thousands of citizens? …

JB: Can you describe the impact of the Phulbari mine on local populations?

PP: Thousands of families would be immediately removed from the mine site, losing their homes and agricultural lands. The company cannot offer them equivalent land simply because there is none. This is concerning because studies of “development refugees” have shown that cash payments to families displaced by development projects frequently results in impoverishment. Independent researchers estimate that as many as 220,000 people around the mine site would eventually be affected by reduced access to water, forcing them to abandon their lands. There is no plan for compensating these people for their suffering and loss.

JB: What can Americans and other foreigners do to show their support of the villagers?

PP: Write letters to the prime minister of Bangladesh! This crisis offers the prime minister an opportunity to make a name for herself and for Bangladesh by turning away from the old model of foreign exploitation and fossil fuels, and leading the way toward a sustainable energy future. It makes sense for Bangladesh – a country that will suffer greatly from climate change – to reject coal, a primary driver of climate change. Letters from international citizens will help convince the prime minister to take a historic, principled stand. Go to the Take Action section of the Cultural Survival website, www.cs.org, to join the letter-writing campaign.

Censored by US Media: Libyan Rebels are Led by a CIA Jackal
Mar 30