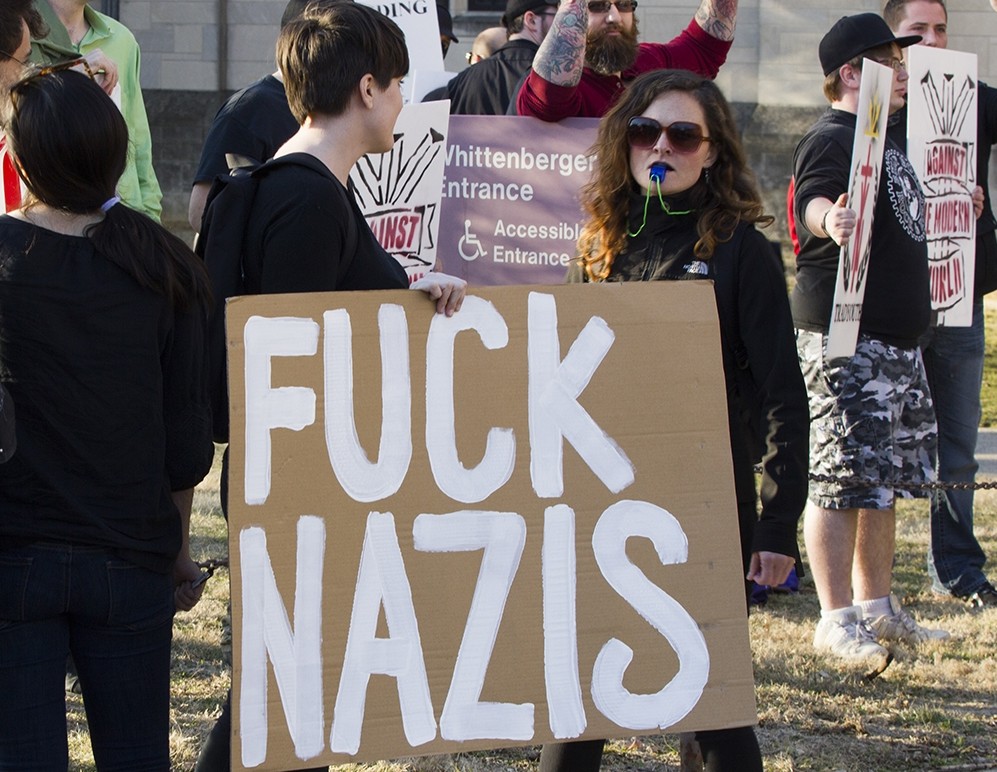 The Traditionalist Youth Network — informally known on IU’s campus as a white supremacy organization — protested against anti-racism author Tim Wise on Wednesday at the Whittenberger  Auditorium.

Wise, known for his multiple books on anti-racism and stopping the spread of white privilege in society, is looked upon not as a self-critical white American, but as an anti-white and anti-Christian Jew through the eyes of the  organization.

Wise is looked at as systematically stirring up racial resentment against white Americans and therefore scolding “gullible and insecure college students into an ideology of guilt, shame, ritual apology and acceptance of our own political disempowerment and demographic genocide,” according to Trad Youth President and founder Thomas Buhls.

Starting at 6:30 p.m., 30 minutes before the event took place, a group of about 30 men started marching from the Sample Gates toward the Whittenberger while holding signs and wearing Nazi memorabilia. From the opposite end, a group that formed as a counter protest started to file directly in front of the men, holding up blank banners in an attempt to cover Trad Youth’s signs and banners.

Trad Youth members’ chants of “Tim Wise, full of lies” were counterparted by the simultaneous blowing of whistles from the opposition.

“It is plainly obvious that they are just here to be cruel and obviously very racist,” Bloomington resident Tom Williams said about Trad Youth. “Their knowledge is warped by their own racism and misogyny.”

Racism can shape-shift and take on different forms, Wise said in his pre-talk Wednesday. Trad Youth members believe diversity leads to white genocide and were there to protest and get their message out to the Bloomington community. 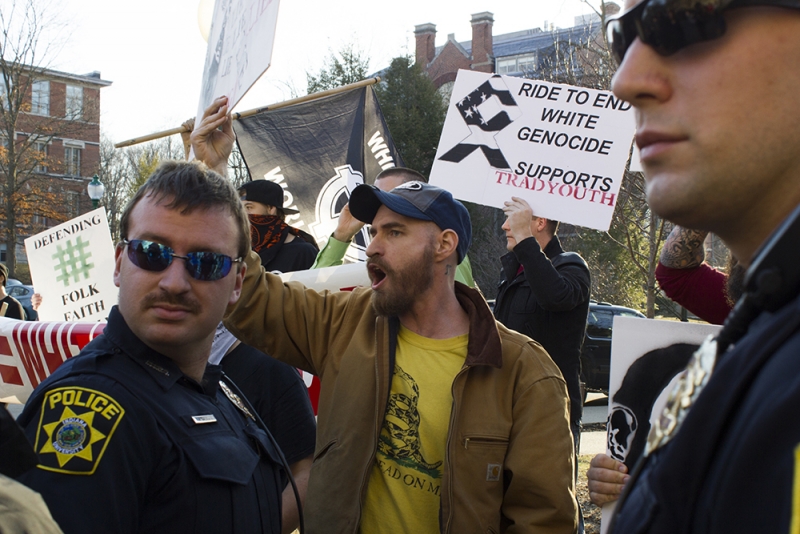 “We don’t even need to go in to disturb the speech,” Buhls said. “We have generated our message already.”

The counterprotest handed out a variety of pamphlets going against the goals of the network, including the history of fighting white supremacy in Indiana. In contrast, network members managed to tear down the blank banners to display their signs more clearly to the crowd, now up to hundreds and growing steadily.

After the screaming of chants from both sides, the network started to mobilize and move toward the Sample Gates and down Kirkwood Avenue.

IU sophomore Sven — who requested his last name not be used — felt the network members liked to make themselves known, having fascist symbols painted on themselves or on signs.

As the protest moved downtown, both sides started to get more aggressive toward one another, forcing police officers to intervene. Police officials refused to give a formal statement in response to both the protest and counterprotest. Officers followed the march until its end, past the city square.

Trad Youth believes Wise is disguised as a civil rights campaigner so he can vividly fantasize about America’s aging white population dying off and being replaced.

Prior to the protest, the network posted an open letter addressed to Wise on its website, tradyouth.org, discussing the comments it found hypocritical when discussing white privilege. The network believes Wise is using his condemnation of white privilege as a mask because he is a benefactor of Jewish privilege.

Responses to these inquiries were not direct, but Trad Youth referred to the Holocaust as a myth in all its  counters.

The march ended when a large white van pulled up, collecting all the Trad Youth members except two  individuals who remained circling the town square until the van circled around. Two police cars followed the van once the members made their exit.

“I think everyone needs to respect and accept others,” Casey Stover, IU sophomore and follower of the protests, said. “We should accept everyone for who they are.”

Previous Article
National Security ‘Experts’ Are Bullshitting Us Into Another Quagmire
Next Article
“Being A Cop Showed Me Just How Racist And Violent Police Are. There’s Only One Fix.”