"... The surge of legislation across the country is largely due to the work of one man: David Yerushalmi, an Arizona-based white supremacist who has previously called for a 'war against Islam' and tried to criminalize adherence to the Muslim faith. ..."

Last week, legislators in Tennessee introduced a radical bill that would make "material support" for Islamic law punishable by 15 years in prison. The proposal marks a dramatic new step in the conservative campaign against Muslim-Americans. If passed, critics say even seemingly benign activities like re-painting the exterior of a mosque or bringing food to a potluck could be classified as a felony.

The Tennessee bill, SB 1028, didn't come out of nowhere. Though it's the first of its kind, the bill is part of a wave of related measures that would ban state courts from enforcing Sharia law. (A court might refer to Sharia law in child custody or prisoner rights cases.) Since early 2010, such legislation has been considered in at least 15 states. And while fears of an impending caliphate are myriad on the far-right, the surge of legislation across the country is largely due to the work of one man: David Yerushalmi, an Arizona-based white supremacist who has previously called for a "war against Islam" and tried to criminalize adherence to the Muslim faith.

Yerushalmi, a lawyer, is the founder of the Society of Americans for National Existence (SANE), which has been called a "hate group" by the Council on American-Islamic Relations (CAIR). His draft legislation served as the foundation for the Tennessee bill, and at least half a dozen other anti-Islam measures—including two bills that were signed into law last year in Louisiana and Tennessee.

With the exception of SB 1028, much of Yerushalmi's legislation sounds pretty innocuous: State courts are prohibited from considering any foreign law that doesn't fully honor the rights enshrined in the US and state constitutions. Because a Taliban-style interpretation of Islamic law is unheard of in the United States, the law's impact is non-existent at best. But critics of some of the proposed bills have argued they could have far-reaching and unintended consequences, like undoing anti-kidnapping statutes, and hindering the ability of local companies to enter into contracts overseas.

But Tennessee's SB 1028 goes much further, defining traditional Islamic law as counter to constitutional principles, and authorizing the state's attorney general to freeze the assets of organizations that have been determined to be promoting or supporting Sharia. On Monday, CAIR and the ACLU called for lawmakers to defeat the bill.

"Essentially the bill is trying to separate the 'good Muslims' from the 'bad Muslims,'" said CAIR staff attorney Gadeir Abbas in an interview with Mother Jones. "Out of all the bills that have been introduced, this is by far the most extreme."

Reports about the rise of the anti-Sharia movement have typically focused on Oklahoma's voter-approved constitutional amendment, which explicitly prohibited state courts from considering Islamic law (a federal judge issued a permanent injunction against the amendment in December). But the movement began much earlier, with a sample bill Yerushalmi drafted at the behest of the American Public Policy Alliance, a right-wing organization established with the goal of protecting American citizens from "the infiltration and incursion of foreign laws and foreign legal doctrines, especially Islamic Shariah Law."

In a 40-minute PowerPoint that's available on the organization's site, Yerushalmi explained the ins and outs of the sample legislation. His bills  differ from the failed Oklahoma amendment in one key way: They don't mention Sharia. Instead, they focus more broadly on "foreign laws and foreign legal doctrines." As Yerushalmi explained in an interview with the nativist New English Review in December, the language is "facially neutral," thereby achieving the same result while "avoiding the sticky problems of our First Amendment jurisprudence."

Since crafting the sample legislation, Yerushalmi's services have been been in high demand as an expert witness. In mid-February, he flew to South Dakota to testify in support of a bill modeled on his "American Law for American Courts" plan. (He also offered to provide pro-bono legal support for the state if the law produced any legal challenges.)

Ultimately, the bill died in committee, after the state's attorney general testified that the bill could lead to lawsuits. "I am a little chagrined by the fact that none of the opponents of the bill have actually read it with any care," Yerushalmi told the committee. "Something else is at work here."

Yerushalmi has suggested that Caucasians are inherently more receptive to republican forms of government than blacks—an argument that's consistent with SANE's mission statement, which emphasizes that "America was the handiwork of faithful Christians, mostly men, and almost entirely white." And in an article published at the website Intellectual Conservative, Yerushalmi, who is Jewish, suggests that liberal Jews "destroy their host nations like a fatal parasite." Unsurprisingly, then, Yerushalmi offered the lone Jewish defense of Mel Gibson, after the actor’s anti-Semitic tirade in 2006. Gibson, he wrote, was simply noting the "undeniable Jewish liberal influence on western affairs in the direction of a World State."

Despite his racist views, Yerushalmi has been warmly received by mainstream conservatives; his work has appeared in the National Review and Andrew Breitbart's Big Peace. He's been lauded in the pages of the Washington Times. And in 2008, he published a paper on the perils of Sharia-compliant finance that compelled Sen. Minority Whip John Kyl (R-Ariz.) to write a letter to Securities and Exchange Commission chairman Chris Cox.

More recently, Yerushalmi co-authored a report on the threats posed by Islamic law—among other things, he worries Sharia-compliant finance could spark another financial collapse—that earned plaudits from leading Republicans like Michigan Rep. Pete Hoekstra. The report was released by Frank Gaffney's Center for Security Policy, for which Yerushalmi is general counsel.

In 2007, he pushed legislation to make "adherence to Shari'a" a felony, punishable by up to 20 years in prison. That same proposal called for the deportation of all Muslim non-citizens, and a ban on Muslim immigration. The United States, he urged, must declare "a WAR AGAINST ISLAM and all Muslim faithful."

Neither Yerushalmi nor the American Public Policy Alliance responded to a request for comment for this article.

If his racially infused writings and rhetoric are any indication, it's Yerushalmi, not his Muslim bogeymen, who seems most determined to remake the American political system. Per its mission statement, SANE is "dedicated to the rejection of democracy and party rule," and Yerushalmi has likewise criticized the universal suffrage movement. As he once put it, "there's a reason the founding fathers did not give women or black slaves the right to vote."

On David Yerushalmi and Pamela Geller 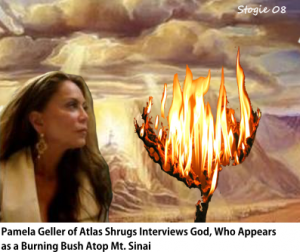 ... Yerushalmi is Pamela Geller‘s personal attorney and has represented her group SIOA (Stop the Islamization of America).  Yerushalmi incorporated American Freedom Defense Initiative which is the non-profit under which she and Robert Spencer produce their blogs.  He is also the legal counsel for Frank Gaffney’s anti-Muslim Center for Security Policy and served in the same role for Stop the Madrassa, the group which got Debbie Almontaser fired as principal of the Khalil Gibran Academy. **

Yerushalmi’s name comes up whenever anti-Sharia or “creeping Sharia” is the subject.  The most recent anti-Sharia bill in Tennessee was actually drafted by Yerushalmi:

“The Tennessee bill goes further by proposing criminal penalties for following Shariah. Matheny said the bill was model legislation, given to him by the Tennessee Eagle Forum, a conservative advocacy group.  Bobbie Patray, state president of the Eagle Forum, confirmed that the law had been drafted by David Yerushalmi, a Chandler, Ariz.-based attorney. Yerushalmi runs the Society of Americans for National Existence, a nonprofit that says following Shariah is treasonous.  He also has close ties to Frank Gaffney, president of the Washington, D.C.-based Center for Security Policy.”  Bob Smietana

Yerushalmi also published a racist article that he must now be ashamed of, as Alex Kane points out “Yerushalmi has deleted as much evidence of the “On Race” article as he could; he removed it from the Internet Archive and the Google cache, and put his entire website behind a registration wall. But here’s a PDF that contains the full article, and it’s as ugly and twisted a piece of racism as anything I’ve ever seen. Yerushalmi opens by calling Islam “an evil religion,” and “blacks … the most murderous of peoples.”

Yerushalmi is also the former employer of Dave Gaubatz, his one-time “Director of Intelligence and Counter-terrorism Studies” and author of a Muslim-bashing book. In 2007, Yerushalmi’s group paid Gaubatz $148,898 for “research.”    Gaubatz has a long history of bigotry targeting Islam and Muslims. He has called Islam an “evil ideology” and a “terminal disease.” Along with his past rhetorical attacks Islam, Gaubatz has called President Obama a “crack head” and wrote that “a vote for Hussein Obama is a vote for Sharia Law.” Nihad Awad

A key leader of the group opposing a new, Arab-focused public school in Brooklyn is a virulent opponent of a democratic Jewish state who denounces “Zionist Israel” and calls on it to “cast off the yoke of liberal democracy.”    Stop the Madrassa leader David Yerushalmi also condemns democracy in the United States and, in comments that evoke classical anti-Semitic stereotypes, says he finds truth in the view that Jews “destroy their host nations like a fatal parasite.”  ...  In a message to a pro-Israel rally last June he asked: “What interest does America have in a strong Israel? If your answer is democracy in a liberal or western sense, know you have sided with the Palestinians of Hamas.”  Jewish Week

Geller founded AFDI (American Freedom Defense Initiative) with attorney David Yerushalmi **.  AFDI is the parent organization of SIOA (Stop the Islamization of America) which has been named a hate group by the Southern Poverty Law Center.