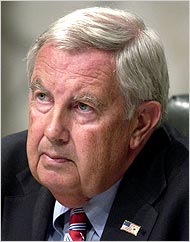 The White House has decided to defy Congress’s latest demand for information regarding the dismissal of nine U.S. attorneys, sources familiar with the decision said yesterday. Such an action would escalate the constitutional struggle and propel it closer to a court showdown.

Senate and House committees have directed President Bush to provide by tomorrow a detailed justification of his executive privilege claims and a full accounting of the documents he is withholding. But White House counsel Fred F. Fielding plans to tell lawmakers that he has already provided the legal basis for the claims and will not provide a log of the documents, the sources said. …