War on the World: Obama’s Surge in State Terror 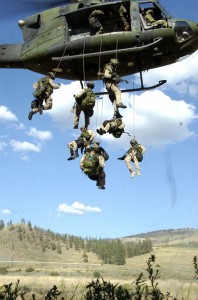 … Our highly intelligent and cool, pragmatic president is now vastly expanding the use of secret war, subversion, sabotage and murder into even more countries around the world, and giving America’s secret, unaccountable death squads and covert operators even more power to carry out their lawless operations. As one Pentagon mandarin gushed, Obama is allowing “things that the previous administration did not.”

That quote comes from a remarkably candid story in the Washington Post on Obama’s “surge” in America’s secret war on the world, which now encompasses no fewer than 75 countries.

(By the way, the Post is often a very good source of information about the operations and machinations of the militarist empire — not because its editors are seeking to expose the empire’s crimes and atrocities, but because they approve of them. And thus they will often write about them, in detail, in the most straightforward manner: “Hey, look at the cool stuff our boys are doing now!”)

As the story notes:

The Obama administration has significantly expanded a largely secret U.S. war against al-Qaeda and other radical groups, according to senior military and administration officials.

Special Operations forces have grown both in number and budget, and are deployed in 75 countries, compared with about 60 at the beginning of last year. … Plans exist for pre-emptive or retaliatory strikes in numerous places around the world …

What’s more, Obama has brought the covert operators and death squad leaders into the inner circle at the White House:

Special Operations commanders have also become a far more regular presence at the White House than they were under George W. Bush’s administration, when most briefings on potential future operations were run through the Pentagon chain of command and were conducted by the defense secretary or the chairman of the Joint Chiefs of Staff.

“We have a lot more access,” a second military official said. “They are talking publicly much less but they are acting more. They are willing to get aggressive much more quickly.”

The White House, he said, is “asking for ideas and plans . . . calling us in and saying, ‘Tell me what you can do. Tell me how you do these things.’ ”

… Obama has made such forces a far more integrated part of his global security strategy [than Bush]. He has asked for a 5.7 percent increase in the Special Operations budget for fiscal 2011, for a total of $6.3 billion, plus an additional $3.5 billion in 2010 contingency funding.

The story notes that the bureaucratic turf wars between the Pentagon and State Department that had hindered some covert operations under the cantankerous Donald Rumsfeld have now disappeared with the smooth comity between Obama’s team of Hillary Clinton and Robert Gates, the long-time Bush Family factotum who now mentors the eager young Democratic president in the ancient ways of oligarchy and militarist empire. And of course, Obama hand-picked Stanley McChrystal — master of America’s darkest arts in the war of aggression in Iraq — to lead his “surge” in Afghanistan.

Indeed, Obama has been so lavish and relaxed in his use of death squads and secret war that the only complaint voiced these days by our Special Oppers — who, the Post notes, “consider themselves a breed apart” — is that they have to spend too much time in current war zones, and not enough plying their wares in new territory:

Although pleased with their expanded numbers and funding, Special Operations commanders would like to devote more of their force to global missions outside war zones. Of about 13,000 Special Operations forces deployed overseas, about 9,000 are evenly divided between Iraq and Afghanistan.