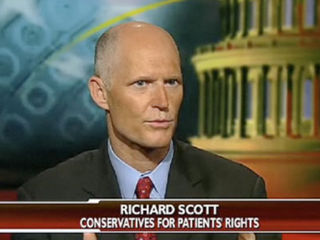 Just as his attack group seemingly disappeared from the public discourse, Scott launched a new effort: to become the next Republican Governor of Florida. Scott’s website already seems to have difficulty distancing himself from his shady business dealings. Scott neglects to mention his disgraced business history, instead portraying himself as a “conservative outsider.” His website directs visitors to send campaign contributions to the same office as his private investment firm. In the past, his firm has invested heavily in technology firms instrumental in helping repressive regimes in Saudi Arabia and Iran. …