"... The experiments were allegedly conducted at the Baltimore-area Edgewood Arsenal. Soldiers were allegedly administered at least 250 and as many as 400 types of drugs, among them Sarin, one of the most deadly drugs known, amphetamines, barbiturates, mustard gas, phosgene gas and LSD. ... The veterans say that some soldiers died. ..." 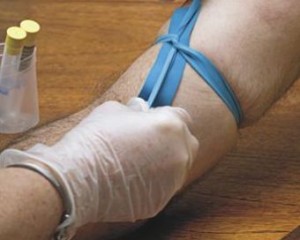 OAKLAND, Calif. (CN) - The Department of Veterans Affairs must disclose certain documents that a class of veterans hopes will prove they were used as guinea pigs by the CIA in Cold War-era drug experiments, a federal judge ruled.

Vietnam Veterans of America filed a class action against the U.S. government in 2009, claiming that at least 7,800 soldiers had been used as guinea pigs in Project Paperclip. The experiments were allegedly conducted at the Baltimore-area Edgewood Arsenal. Soldiers were allegedly administered at least 250 and as many as 400 types of drugs, among them Sarin, one of the most deadly drugs known, amphetamines, barbiturates, mustard gas, phosgene gas and LSD.

Using tactics it often attributed to the Soviet enemy, the U.S. government sought drugs to control human behavior, cause confusion, promote weakness or temporary loss of hearing and vision, induce hypnosis and enhance a person's ability to withstand torture, according to the complaint. The veterans say that some soldiers died, and others suffered seizures and paranoia.

They say the CIA knew it had to conceal the tests from "enemy forces" and the "American public in general" because the knowledge "would have serious repercussions in political and diplomatic circles and would be detrimental to the accomplishment of its mission."

The veterans' claims have changed over the course of discovery, and there are four remaining legal claims against the CIA, Defense Department, Army and Department of Veterans Affairs:

"In October 2010, DVA identified over 400 documents regarding this subject which it asserted were subject to the deliberative process privilege," Corley wrote. "DVA has now identified over 700 additional documents mostly from the same time period and covering the same subjects over which it asserts deliberative process privilege as well. However, DVA has not provided any specific explanation as to why these documents were not identified the first time around when DVA was searching for responsive discovery and why it took DVA over a year to identify additional documents regarding these subjects on a privilege log."

Corley balked at the DVA's claimed that the veterans could not seek production of these documents because they already conducted depositions. "This argument is not well-taken," she wrote. "Plaintiffs were between a rock and a hard place because of defendants' delayed production."

There is some overlap, however, since DVA has withheld them as being duplicative or protected by attorney-client and work-product privilege.

In addition to those documents, the court deliberative process privilege still shields certain studies and a Government Accountability Office report from 2007-09. But the DVA must produce the GAO report for the court to review in camera.

Corley also called for an in camera review of documents that the Defense Department withheld on the basis of deliberative process privilege.

"Because these documents appear to cover the same time period and many of the same subjects as the DVA documents the court previously reviewed, the documents are likely relevant to plaintiffs' claims," the decision states. "Accordingly, the court will review the documents in camera to determine whether the deliberative process privilege applies to these documents, and if so, whether plaintiffs have demonstrated substantial need sufficient to overcome the privilege."

Veterans can also access an encrypted mailbox that DVA Affairs created to verify test subjects in mustard gas and Edgewood Arsenal experiments, Corley said, but it would be too burdensome for the department to produce 650 veteran claim files related to mustard gas exposure.

"Plaintiffs contend that the government failed to notify tens of thousands of individuals that they had been exposed to mustard gas and lewisite," the decision states. "The contents of the claim files of the 650 individuals who filed claims based on their exposure will shed little if any light on plaintiffs' notice claims."

The court agreed with the CIA that it would be too burdensome for the agency to locate those documents because "they were redacted by hand over thirty years ago and the original archived versions currently occupy eighty linear feet of shelf space."

This week, the veterans are also expected to receive two unclassified magnetic tapes from the 1970s that could contain data about testing at Edgewood Arsenal.

Corley said the veterans can take the depositions of Joe Salvatore and Dr. Kelley Brix because their names came up in newly disclosed documents. The pending production that Corley ordered Friday could also lead the veterans to resume deposition of David Abbott.

The parties must meet and confer on the case schedule and submit a proposed calendar by April 19.

"CIA Wants Out of 'Human Guinea Pig' Case" - "The CIA asked a federal judge to dismiss it from a case in which U.S. veterans claim the government used them as human guinea pigs in Cold War-era drug experiments. The CIA claims veterans can't sue the it because they cannot prove they took 'secrecy oaths.' ... "