Buttars is Against Education

Farce masquerading as intelligence was on display last weekend at an Eagle Forum get-together of extremist celebration in Salt Lake City. The master of ceremonies was Utah’s own State Sen. Chris Buttars, R-West Jordan.

Buttars is no stranger to buffoonery. He frequently makes comments that are both foolish and bigoted. In the past, he has compared gays who disagree with him to radical Muslims. On Saturday, at the Eagle Forum event, Buttars and the other attendees worked themselves into a lather over the so-called socialistic dangers of public education.

It was an event that would have brought Glenn Beck to tears and provided Jon Stewart great fodder for humor. Buttars, who is regrettably chairman of the Senate’s Public Education Committee, wants to amend the Utah State Constitution to allow the Legislature the power to set state education curriculum. 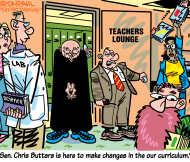 Now that’s a frightening thought. Under a Buttars-led charge against public education, we can expect teachers filling students heads with nonsense about gay activists being just like al-Qaida. Can you imagine the textbooks that might be approved? First in line might be the The 5,000 Year Leap, by Cleon Skousen.

Buttars and his minions at the far right convention are convinced that there is a dark, black helicopter-type of conspiracy to lead public schoolchildren to sing The Internationale and become socialists for life.

At the Eagle Forum convention, Skousen’s book, The Naked Communist, was cited as evidence for the “conspiracy.” Buttarites apparently believe that there is an attempt today by communists to take over the public schools.

Of course that’s nonsense. What public schools are trying to do is offer students a well-rounded education that will eventually encourage critical thinking and a respect for many viewpoints.

That is something that Buttars and the Eagle Forum does not seem to want. They want their narrow far-right views to be the predominant opinions offered to students.

Buttars may have received cheers from Eagle Forum for his anti-intellectual proposal, but we are confident that there are enough reasonable legislators to consign Buttars’ latest idea to his own echo chamber.