American Terrorism » US Urged to Deport Suspected Nazi to Serbia 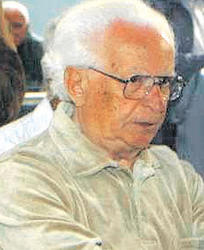 Peter Egner, charged by a Serbian court with horrendous crimes during the Holocaust, currently lives in a Seattle condo

A Serbian court issued an international arrest warrant last April for a U.S. man accused of Holocaust war crimes – and now the World Jewish Congress (WJC) calls on the United States to actually deport him.

Peter Egner, 88, who lives in a retirement condo in Seattle, is suspected of active duty in a Nazi-run Serbian police unit, known as an Einsatzgruppe. The unit killed some 17,000 Jewish and Serbian women and children in early 1942 by gassing them with carbon monoxide in a specially designed van. Egner, specifically, is accused of pushing many of the victims into the vans.

Ronald S. Lauder, president of the WJC, has now issued a call on American courts and authorities to "quickly pave the way" for the extradition of Egner to Serbia. "The accusations against Egner are so horrendous that no further time must be wasted," Lauder said. "Not only the Jewish community in Serbia, but Jews world-wide expect Nazi war criminals to be tried and brought to justice, irrespective of their age."

An ethnic German who was born in the former Yugoslavia, Egner says he is innocent, and is even filing suit in a Seattle court to demand that further information on his alleged activities not be publicized. He moved to the United States in 1960 and became an American citizen in 1966.

"These people may be frail," Lauder said about suspected Nazis who are still alive, "but so are many Holocaust survivors. Justice done belatedly is still better than justice not done at all."

Remembering Serbia’s Nazi Past and Mass Murders of Jews