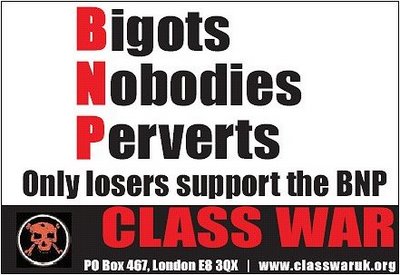 ” … Barnbrook and his eager leafleteers have reason to be cocky. … “

On a sunny day in Stanmore, north London, a motley crew of people gathers at the Tube station. An elderly man leans on a walking stick, a faded blue, white and red tattoo saying “Proud to be British” just about visible on his forearm. The tattoo might be older than I am. Bert, a sixty-something retired heavy-machine worker, is inappropriately dressed in a woollen jumper and beige overcoat. He lets out a yelp of approval when a truck with a Union Jack on its side – carrying “British Meat” – hurtles by.

Housewives in jeans and short-sleeved tops talk animatedly about the beautiful weather. Charlotte Lewis, a 35-year-old unemployed woman from Croydon, is wearing a loud gold lamé jacket and black jeans. She speaks with a south London twang: “Sometimes I get on a bus and I’m the only white person on there,” she complains. “It’s a bit distressing.”

A white van swerves into view, beeping at the group of 15 men and women to move out of the way. Out steps Richard Barnbrook, dressed in a khaki suit and with a roll-up between his fingers. He has the look and swagger of an old colonialist. I can picture him leaping out of a jeep in white-ruled Rhodesia in the same manner he leaps out of his white van in multi-ethnic Stanmore. His two helpers, big men in T-shirts, unload boxes of leaflets headlined “The Changing Face of London”. They show a group of smiling white women at a street party in the 1940s (the good old days) next to a picture of three women wearing burqas, one of whom is giving a two-fingered salute to the camera (the bad new days).

This is the London wing of the British National Party. Five days before the local and London mayoral elections, it has come to Stanmore and Edgware in north London – which have large Indian and Jewish communities – for some last-minute electioneering. Its members are confident, even cocky, about their chances of a seat on the London Assembly. “We’ll definitely get one, maybe two,” says Barnbrook, who is the BNP’s mayoral candidate.

Barnbrook is a graduate of the Royal College of Art, who worked with the gay film-maker Derek Jarman in the 1980s (“Me and Derek and Tilda [Swinton] hung out together, and there was never a problem,” he says). His fiancée is Simone Clarke, former prima ballerina of the English National Ballet and a fellow BNP member, who has a mixed-race child. “How can I be racist when I adore that child?” he says, when I ask if the BNP is anything more than a Johnny Foreigner-baiting party. Barnbrook, who leads the BNP’s 12 councillors in the London Borough of Barking and Dagenham, insists the BNP is “concerned about lots of things”.

“If I had to put our concerns in order of importance, I would say: housing, transport, health, education, the environment and law and order.” So immigration isn’t a concern at all? “Well, immigration impacts on all of those things,” he says. “It causes overcrowding in housing, strain on the transport system, more pollution in the environment and it disrupts law and order.”

I see. Behind Barnbrook’s “respectable issues” there lurks the odious far-right idea that immigrants are the root cause of every social ill.

Barnbrook and his eager leafleteers have reason to be cocky. At the time of writing, many predict that the BNP will make important gains in the local and London mayoral elections. In London, parties must win 5 per cent of the vote in order to get a seat on the 25-member Assembly. That threshold was introduced by the government to allow minor parties such as the Greens to be represented, while keeping out the far right. In the last London elections in 2004, the BNP won 4.7 per cent of the vote – only 6,000 votes short of the threshold for gaining a seat. This time it is expected to win bigger, especially since the UK Independence Party (which won 8 per cent in 2004) is in disarray.

Around the country, the BNP has grown in local electoral strength over the past ten years. Under its founder, John Tyndall, the party was a racist menace but electorally insignificant, only ever winning handfuls of votes.

That began to change with the election of the slick Nick Griffin as party chairman in 1999. He set about trying to improve the BNP’s image. The party had won its first-ever council seat in the east London borough of Tower Hamlets in 1993. After the local elections of May 2006, it had over 50 council seats: 12 in Barking and Dagenham, and a smattering of seats in the north of England: mainly in Stoke-on-Trent, Burnley and West Yorkshire.

“The BNP has tended to prosper in segregated poor, white communities in the north, and in parts of the south-east where there have been unexpected infusions of new immigrants,” says Tony Travers, an expert in local government at the London School of Economics. The party’s vote has grown exponentially at general elections, too. In 1992, it won 7,005 votes; in 1997 it won 35,832; in 2001 it won 47,129; in 2005 it won 192,746. What is behind the growth of the BNP? How has it managed to gain a toehold in local politics?

Many would argue that the party’s recent success represents the re-emergence of flick-knife racism, even that “neo-fascism” is on the march. In fact, the expansion of the BNP can be seen as a product of mainstream political failure. The party – a ragbag of ageing skinheads, slick wannabe politicians and ditzy women with chips on their shoulders – thrives on disillusionment with the three main parties.

“There is research evidence that a lot of people who vote for the BNP are not aggressive neo-fascists, but rather are cheesed off with mainstream politics,” says Travers. “The rise of the BNP can be seen as a grim indicator of the failure of the Labour and Conservative parties. If the parties functioned properly, then probably the BNP could be contained. Its supporters would be tempted away by old-fashioned Labour values or by the legitimate, centre-right nationalism of the Tories.”

But today, Travers says, there is a “clustering in the centre” in mainstream politics, and a “collapse of the ability of the mainstream parties to win new members and supporters”. The effect has been to allow the BNP to proliferate.

“If the other parties were doing their job properly, we wouldn’t be here having this conversation right now,” says Barnbrook. “I know we win votes because people are angry with the other parties.”

Far from being a clear-headed neo-fascist party, the BNP comes across as a mess of contradictions opportunistically trying to pick up the votes of the disillusioned. For example, Barnbrook tells me the BNP has “no problem with black people”. Someone clearly forgot to brief Bert, an older member of the BNP, who says “mixed marriages are just wrong because both races become denigrated”. Bert has “no comment” on the question of whether six million Jews were exterminated in the Holocaust, yet Charlotte from Croydon tells me she was “really, really moved” when she visited Anne Frank’s house in Amsterdam a few years ago. Barnbrook says the BNP has “nothing in common with the thugs of the NF”; Bert tells me the NF “are decent blokes”.

Most strikingly, where Barnbrook tried to convince me that “millions of Britons empathise and support our message”, Charlotte reveals that a party stalwart advised her to walk to the top of a cul-de-sac and leaflet outwards. “It’s safer that way,” she says. “You can run away if people get angry.”

With them for a day, I noticed two things about the BNP: its reliance on mainstream fear about immigration and its opportunistic exploitation of people’s disdain for Labour, Tories and Lib Dems. BNP doorsteppers talk about Britain being “overcrowded” and claim immigrants are polluting our environment; they argue that Poles lower British wages. These are thoroughly mainstream ideas. They tell voters, in the words of Bert: “If you’re pissed off with the rest, vote for the best!”

All parties should be concerned that the growth of the BNP over the past 15 years – from 7,005 votes in the 1992 general election to 192,746 in 2005 – has coincided with political malaise and cynicism across the UK.

Perhaps the best way to smash the BNP is to challenge the mainstream fear of immigration that it feasts upon and give voters something inspiring to vote for in its place.