” … Sir Peter, who has overseen the security services for the last four years in his role as the intelligence services commissioner (ISC), cannot be expected to scrutinise his own work. … “ 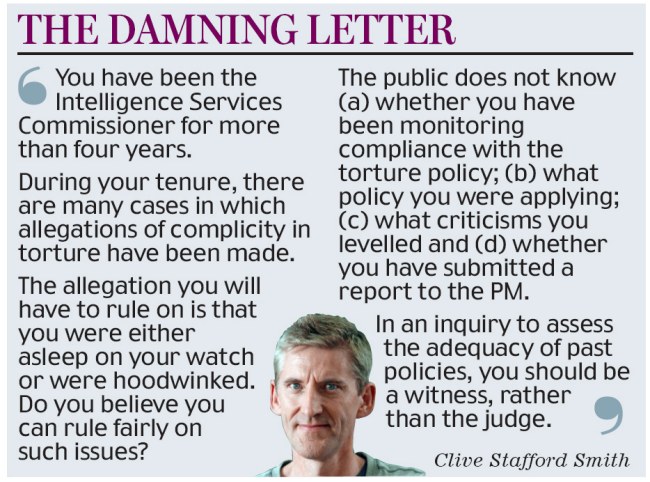 A leading legal charity has called on a senior judge to step down from the inquiry he is leading into allegations that the UK has been involved in torture, saying his impartiality is “fatally compromised” because of his relationship with the security services.

Sir Peter Gibson, a former appeal court judge, was appointed by David Cameron earlier this month to chair the investigation into claims of British complicity in the abuse of detainees abroad since the 9/11 attacks.

Reprieve raised a number of concerns about his suitability for the job in an 11-page letter to Gibson, copied to the prime minister.

It says Sir Peter, who has overseen the security services for the last four years in his role as the intelligence services commissioner (ISC), cannot be expected to scrutinise his own work.

The charity says the former foreign secretary, David Miliband, has revealed that Gibson secretly investigated allegations of misconduct at the previous government’s request. His findings remain secret but charity fears they might prejudice the current inquiry.

Reprieve goes on to ask Gibson whether he considers his opinion – expressed in three consecutive reports between 2006 and 2008 – that security services personnel were “trustworthy, conscientious and dependable” reflects a bias.

It contrasts his assertion with Lord Neuberger’s finding earlier this year, in which the master of the rolls concluded that MI5 did not respect human rights, had failed to renounce participation in “coercive interrogation” techniques, and had “a culture of suppression” in its dealings with Miliband and the court.

Given that it was part of his job as ISC to supervise ministerial authorisations that would allow the security services to violate the law abroad, says Reprieve, he would have to appear as a witness before the inquiry that he also chairs.

The letter asks: “Please could you explain how you are able to preside over an inquiry about British complicity in torture during the time period in which you were responsible for the statutory oversight of the security and intelligence services?

“The allegation that you will have to rule on is (with apologies for putting it so frankly) that you were either asleep on your watch or were hoodwinked. Out of fairness to victims of torture, the security services and yourself, do you believe that you can rule fairly on such issues?”

Clive Stafford Smith, the director of Reprieve, said there was a “patently obvious basis for a judge to remove himself”, adding that given the scale of Gibson’s conflict of interest, the matter was really “an incredibly uncontentious issue”.

He told a press conference this morning that he had repeatedly written to Cameron to raise his concerns, but had not “received the first whisper of a response”.

He added: “If they refuse to discuss this in private, then we will spend the rest of the summer discussing it in public.”

Stafford Smith also confirmed that the group would look at its legal options if Sir Peter refused to step down.

He added: “Welcome though the torture inquiry is, the current structure is a sham. Sir Peter Gibson was perhaps the least appropriate judge to evaluate the security services. The government must get serious about learning the mistakes of the past, rather than try to cover them up, or we are in for a long, hot summer.”

A Downing Street spokesman said that the prime minister had full confidence in Gibson.