UK: ‘Answer that and I’ll kill you.’ The media bow to mining’s alpha male – now for Rio 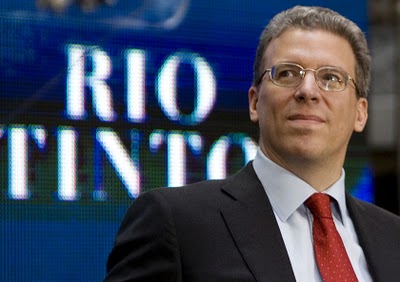 If the boss of BHP Billiton calls you to a briefing, you’d better stick to his script. Mark Leftly sees him in action, fighting to pull off a $360bn merger.

Chewing his gum with quick, aggressive bites, Marius Kloppers, the 45-year-old crop-headed Afrikaaner chief executive of mining giant BHP Billiton, looks very much the poster boy of his extraordinarily macho industry. One of the seven journalists summoned to Goldman Sachs’ Fleet Street headquarters on Wednesday for a news briefing later said of him: “He’s like a South African army general, a really tough guy. Very different to Tom.”

“Tom” is Tom Albanese, the chief executive of Kloppers’ takeover target, Rio Tinto, a man intriguingly said by one banker working in this field to have “a bit more of a wild side” than his rival. Kloppers is determined to merge the two groups in a deal that would create a mining monolith worth $360bn (£185bn).

Albanese has established a strong defence team, including bankers from Morgan Stanley and Credit Suisse, to fight off Kloppers after he mooted a three-for-one share offer in November. BHP has since raised this to 3.4 for one and will formalise an offer if and when it gets European Union regulatory approval later this year.

The summons to journalists last week was completely in character in what has become a drawn-out phoney war, one party spinning heavily against the other. The invitation said that the briefing would “provide an overview of how BHP Billiton’s petroleum [division] is structured and delivers value”. There was no real news, such as fresh results or expansion plans for the business, but Kloppers is determined to step up his campaign to win Rio Tinto by emphasising just how successful BHP has been. And the media were there because they wanted to know more from him about how he’s going to do that.

Kloppers was an intimidating presence, revelling in his position as the room’s alpha male. He allowed himself a half-smile when J Michael Yeager, the bushy-moustached head of the group’s petroleum business, referred to him as “Boss”. When Yeager was asked what he thought the oil price could rise to, Kloppers barked: “If you answer that, I’ll kill you, Mike.”

Though he spoke with a broad grin, Kloppers was demonstrating his authority so clearly that it was hard to believe he had been the “boss” for little more than a year. He was at it again when Yeager was asked about the possibility of renegotiating less than successful contracts – an issue that had been raised at an earlier briefing. “Stop!” Mr Kloppers ordered. Yeager and journalists alike obeyed. “I nearly did my nut,” he barked, “when someone said we renegotiated. If we do a bad business deal, we live with it.”

For all his authoritarian manner, Kloppers disarmed his audience with his plain speaking and relaxed posture, leaning far back into his chair as he explained just why BHP is so special. He and Yeager boasted that the petroleum business was a “supermajor” in the oil world, had earnings before interest and tax of around 60 per cent, and would grow at 10 per cent per year for the next four to five years. The boss then reminded everyone: “What I keep saying is that BHP’s mission in life is to deliver profit.”

This was getting to the real reason the journalists had been granted an audience: to put across the message that the BHP-Rio Tinto merger would bring even greater returns for shareholders. With the press corps having skirted around the issue for half an hour, Kloppers was finally asked if the point of the briefing was to emphasise BHP’s strong business potential, so limiting calls for the company to increase its offer for Rio Tinto.

Acknowledging that BHP’s broad portfolio was “not an accident”, Kloppers said the only type of deal that interested him was one that was “value accretive”. He also hoped to end suggestions that the petroleum division would be sold off should BHP get its hands on Rio Tinto: “We want to cement [the idea] that petroleum is a core business,” he said, his hands making chopping actions to drive home the point.

Kloppers then went on the offensive, saying the recent increase in BHP’s share prices (like Rio Tinto, it is dual listed, in London and Australia) meant his offer overvalued his target. “The market is telling me, unequivocally, Rio Tinto is not worth 3.4 shares,” he argued, indicating just how generous he had been.

Even some on BHP’s side are worried that Kloppers has been too aggressive. “BHP will get Rio Tinto,” says one. “But the strategy means it will end up paying much more than 3.4.”

The idea of a BHP-Rio Tinto tie-up goes back years, and claimed the job of one of Kloppers’ predecessors, Brian Gilbertson, who failed to persuade his board back in 2003. Gilbertson, though, believes that Kloppers has the “ruthlessness” to succeed where he did not.

Kloppers tries to play down just how much he obsesses about the deal, noting that he only works on it part-time, with 75 others at BHP engaged full-time. But an old friend laughs at the suggestion, saying he thinks about Rio Tinto “probably 24/7”.

That same friend also points out that behind the “intense” exterior lies an extremely kind family man: “Marius comes across as quite a hard guy but he adopted a child from an underprivileged background in Africa.”

Kloppers is also determined to be viewed as open. He argued in the briefing that 90 per cent of what BHP will put in its regulatory filing to the European Union is already in the public domain. More importantly, he did not shy away from answering questions on his strategy for the combined company, saying that he could foresee about 15 per cent, around $50bn, of the new business being sold off over the following few years.

Displaying that same ruthless streak, Kloppers also suggested that he would fight any competition body that tried to force a sale of any part of the business as a condition of approving a takeover: “The combined company would have the economic benefit of supplying more product more quickly to the market. It would [still only] provide 20 per cent of the iron ore needs of China. If there is no economic harm, then there should be no remedies.”

This will be a long battle: the formal offer isn’t likely to be made until the fourth quarter, but Kloppers is prepared to sit it out: “This is a game for the patient and we are patient people.”

Unfortunately, it seemed that his inquisitors on Wednesday were not worthy adversaries. As the questions came to the end, he smiled and asked: “That’s it? Easy crowd.”

Head to head: the hunter and the hunted

Petroleum – divisional head J Michael Yeager claims: “There is not a single large oil company that’s got a better growth profile than we’ve got”

Copper – the Olympic Dam mine in South Australia is underperforming but a huge capital expenditure programme could raise annual production from 182,500 to 220,000 tons

Aluminium – following the $38.1bn takeover of Alcan last October, Rio Tinto claims to be “the number one” producer of aluminium and bauxite in the world

Iron ore – Rio Tinto produces nearly 145 million tons a year. Its mines are primarily located in Australia and the north-east of North America