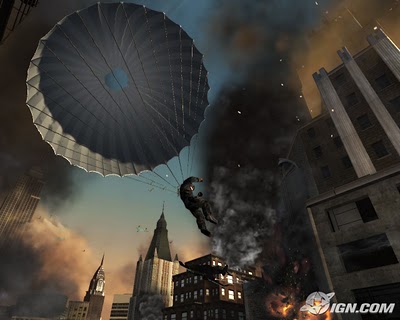 When Liberty and Justice are not for all... America Occupied by Nazis!

Some other War Games Titles on this XBox page include:

"Turning Point: Fall of Liberty is set in 1953 in the midst of an alternate reality where Nazi forces win World War II and opens as the Third Reich launches a decimating attack on New York. Nazi battleships quickly take the harbor, monstrous Zeppelins fill the skies, jet aircraft execute bombing runs and, as armed paratroopers descend on to the streets, the city is taken block by block. With New York falling to pieces, and Washington D.C. in enemy sights, it's time to fight afresh in a new battleground."

Codemasters puts out Turning Point. "Established in 1986, Codemasters is one of the largest and most prolific videogame developers and publishers in Europe."

Turning Point, however, has potential as an ANTI-fascist education tool. The Codemasters newsletter raves: "We urge you to take a look at how the threat of occupation crept upon the unaware American people. We were too busy caring about superficial mundanities to look at the bigger picture until the menace overtook us; in one fell swoop their domination was complete. The United States of America should not be a plaything of a shadowy dictator. We'll fight until our constitution, founded on the principles of freedom, under a democratically-elected president - and not a puppet government - are restored and the threat recedes forever. JOIN THE RESISTANCE ... Ignore any propaganda and sign up now. ... "