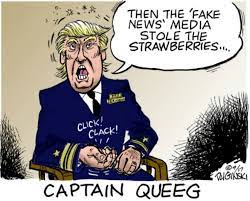 US President Donald Trump walks to Marine One prior to departure from the South Lawn of the White House in Washington, DC, October 2, 2020, as he heads to Walter Reed Military Medical Center, after testing positive for Covid-19. - President Donald Trump will spend the coming days in a military hospital just outside Washington to undergo treatment for the coronavirus, but will continue to work, the White House said Friday (Photo by SAUL LOEB / AFP) (Photo by SAUL LOEB/AFP via Getty Images) Share on Facebook Share on Twitter Share via email Print

Was it only yesterday that I analogized Donald Trump to an ersatz Wizard of Oz afflicted with a disabling psychological condition? In the profoundly disturbing hours since, Trump has evoked an even more emblematic and instructive fictional character: Captain Philip Francis Queeg of Herman Wouk’s Pulitzer prize-winning novel of World War II, The Caine Mutiny.

Queeg is a frightening, pitiable caricature of naval leadership whose increasingly dangerous behaviors compel his officers to save their ship by seizing command. Perhaps you’ve seen the movie, anchored in Humphrey Bogart’s indelible rendition of a man cracking up before our eyes, raving on the witness stand about “disloyal” officers until becoming incoherent. But not even Bogart could capture, nor Wouk imagine, the terrifying self-indictment of a president far sicker than Captain Queeg.

Nonetheless, the fictional Queeg serves as prototype for the all-too-real Trump—and the dilemma he presents us. Queeg is incompetent, paranoid, given to bullying, prone to blame-shifting, obsessed with appearances, unable to admit error, and determined at all costs to cover up grievous misjudgments and mistakes.

As evidence of their captain’s mental fragility accumulates, his officers fear that he may crack under pressure. But after resolving to report his behaviors to a higher authority, they temporize.

The crisis comes—a deadly typhoon in the Pacific. Inevitably, Queeg’s panicky misjudgments threaten to capsize the Caine. In extremis the captain’s second-in-command, supported by his fellow officers, displaces him to save the ship.

Over the last 24 hours, Trump’s statements provide an uncanny parallel to the behaviors which moved Queeg’s officers to consider turning him in. The difference is that, for a president, there are no higher authorities. There is only the Twenty-fifth Amendment.

The situation in Washington grows dire. For Trump’s most recent ravings make Queeg look like a model of sanity and restraint.

He attacked his own cabinet members for not prosecuting or persecuting his political adversaries. Attorney General William Barr, Trump proclaimed, will go down in history as “a very, sad, sad situation” if he did not indict Joe Biden and Barack Obama:

Unless Bill Barr indicts these people for crimes, the greatest political crime in the history of our country, then we’re going to get little satisfaction unless I win and we’ll just have to go, because I won’t forget it. . . . They want to get more, more, more, they keep getting more. I said, “You don’t need any more.”

Of Kamala Harris, Trump said, “she’s a communist,” calling her “this monster that was on stage with Mike Pence.” He claimed that Biden “wouldn’t be president for two months” because “he’s not mentally capable.”

He retweeted tweets asserting that Nancy Pelosi might be planning “a coup” against him. He asserted that law enforcement was “watching” Nevada’s governor for potential voter fraud.

After the FBI thwarted a kidnap attempt by right-wing militia against Michigan Gretchen Whitmer, he labeled her “the lockup queen”—a reference to her life-saving public-safety directives to stave off the pandemic. He complained that Secretary of State Mike Pompeo had not yet released Hillary Clinton’s emails, exhuming his demented obsession from 2016.

All this in but a few hours.

Obviously, Trump has long since has become an unacceptable danger to the country he is sworn to protect—not only to our spirit, but to our safety, security, and the conduct of our democracy. Until now, only in feverish political potboilers do lunatic presidents propose to jail the opposing candidate. No man this unmoored should be permitted to hold—and abuse—such power.

But he does, and so we watch the spectacle of his unraveling. When the presidential debate commission decided to hold a virtual debate for the sake of public safety, Trump refused to engage in this basic element of democracy. Appropriately, Biden’s campaign condemned “Trump’s erratic behavior.” In a sign of chaos within Trump’s circle, his campaign manager—also afflicted with COVID-19—suggested that Trump might debate after all.

Yet Trump still suffers from a potentially lethal disease which—with his considerable assistance—has killed nearly 215,000 Americans. For his own sake, and that of others, a president possessed of minimal self-awareness and empathy would refrain from debating in person—or demanding the presence of others.

Not Trump. “I’m back because I’m a perfect physical specimen and I’m extremely young,” announced our ill-conditioned, 74-year-old president.

That this man has already threatened the peaceful transition of power—and clearly means it—is reason enough to remove him from office.

So is the worry that Trump will abuse our military power—potentially provoking an incendiary geopolitical crisis—in a reckless attempt to reverse his failing electoral fortunes. This need not involve that terrifying conceit of apocalyptic political fiction: the unhinged president reaching for the nuclear button. But whatever dangers Trump may pose, one cannot dismiss the deranged verbiage he used yesterday with Rush Limbaugh to threaten Iran.

The language itself shows a president who has exceeded his limited capacities for self-control, rhetorical and behavioral. “If you fuck around with us,” he informed the Iranians, “if you do something bad to us, we’re gonna do things to you that have never been done before.”

What might that be? One cannot help but remember that John F. Kennedy’s coolheaded judgment during the Cuban missile crisis helped save the Western hemisphere from a nuclear catastrophe. One simply cannot know, and America should not risk, what Trump may do when his psychic thermometer passes the boiling point.

Far more prosaic, but still lethal, Trump daily exacerbates the deadly risk presented by the coronavirus. That he is unable to comprehend the reality of COVID-19, or his unique personal responsibilities as president, is—in itself—disqualifying.

Already he is pressing to restart his campaign—with public events. “I’d love to do a rally tonight,” he said on Tuesday. “I wanted to do one last night.” This is reckless—and utterly consistent with his skewed emotional wiring.

In his pathological isolation from other human beings, Trump cannot even take responsibility for the fact that—because of his callous contempt for the public health protocols urged by his own coronavirus task force—his rollout of Amy Barrett proved to be a superspreader which sickened numerous staffers and GOP grandees. Displaying his reflex for narcissistic self-expiation, Trump intimated that his infection may have come from the supposedly adoring Gold Star families who met with him one day later.

Better that he should worry about whether he infected the families of dead American soldiers—as would any normal person. Trump’s refusal to acknowledge that he is the center of a coronavirus hotspot epitomizes his grotesque unfitness for the presidency.

Even Mitch McConnell tacitly admits as much. Says McConnell, “I haven’t actually been to the White House since August the 6th, because my impression was that their approach to how to handle [the pandemic] is different from mine and what I suggested that we do in the Senate, which is to wear a mask and practice social distancing.”

A president who cannot even appreciate that much must be replaced by one who can.

There is informed speculation in the medical community that Trump’s recent grandiosity, aggression, and erratic behavior stems from taking the steroids prescribed to control his case of COVID-19. “In extreme cases,” a medical expert told the New York Times, steroids may cause “mania and impaired decision-making.”

Perhaps so. No doubt to refute this and other physical and mental health concerns, last night Trump appeared on Fox News with Tucker Carlson so that a Fox medical contributor, Dr. Marc Siegel, could—as a network press release put it—“conduct a medical evaluation and interview during the program.” This reality TV medicine, like everything else Trump orchestrates to tout his supposedly superb health, had all of the credibility of the televised assessment once proffered by the aptly-named Dr. Oz.

Dr. Siegel proved to be less physician than yet another Fox News enabler—who, one noticed, proved to be oblivious to the irony that he was conducting a remote “medical evaluation” with a president who insists that a remote debate is worthless. A few softball questions elicited the surprising information that, according to Trump, he has routed COVID-19—having staged an astonishing recovery reminiscent of the heartiest Viking. Beyond the inherent wonder of himself, Trump credited ingestions of Regeneron’s antibody treatment which, despite his administration’s failure to facilitate timely mass testing, he promised to distribute to every American for free. In short, we were proffered a few choreographed moments of Trumpian grandiosity—doubling down on his trademark contempt for the intelligence of his audience.

But Trump’s unsettling exercise in opacity, however unworthy of his office at so grave a moment, was also ultimately superfluous. He has a pre-existing condition which made him a danger to our country since his first day in office: an ineradicable personality disorder which fatally compromises the ability to perceive anything outside his own stunted inner landscape. The only reality he has grasped, in his frighteningly feral way, is that Joe Biden is going to beat him—and it is making him more dangerous than ever.

When a president becomes mentally impaired, the Twenty-fifth Amendment empowers the vice president and majority of the cabinet to notify Congress that the president is unable to discharge his duties—requiring the vice president to immediately become acting president. But, unlike the officers of the Caine, Mike Pence and his fellow minions do not face imminent death, and their fear of Trump’s restive base far outstrips their concern for our country. In their catatonic cowardice, they cannot speak the truth they know.

Americans have but one recourse: to defeat Trump in November—by the decisive margin he so deeply fears. Only then can we be assured that, despite his sickness, he cannot defy the results.

Richard North Patterson is a lawyer, political commentator and best-selling novelist. He is a former chairman of Common Cause and a member of the Council on Foreign Relations. M
Login
0 Comments