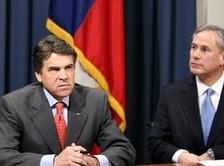 Last May, Texas joined the growing roster of states with a voter ID law requiring those seeking to exercise their most fundamental civic duty to present a state-issued ID before casting a ballot. Like a driver’s license or, this being Texas, a concealed handgun permit.

And that was that, at least for the minute or two it took for Attorney General Eric Holder to remind the state how it used to make it very, very difficult for black people to vote and, as a result, had to get approval from the Justice Department to make potentially discriminatory changes to the election law. So, the Obama Administration blocked implementation of the bill under Section 5 of the Voting Rights Act of 1965. Texas Attorney General Greg Abbott, being Greg Abbott (“My job is pretty simple. I go into the office, I sue the federal government, and then I go home.”), promptly challenged the constitutionality of the law in federal court.

The trial kicks off today in D.C. before a three-judge panel. The arguments haven’t changed much since January. Republicans still say voter ID laws are necessary to prevent a flood of millions nine fraudulent votes from unfairly tipping elections. And Democrats still insist that the laws will block many more legitimate votes and discourage voters, particularly minorities, from showing up to the polls.

There’s a host of analysis out in advance of the trial, as Michael Li points out. A ruling is expected by the end of August, though that won’t be the end. Here’s betting that this one winds up before the Supreme Court.

Previous Article
‘Whites Only’ Christian Conference Held in Alabama
Next Article
How Many Millions of Cellphones Are Police Watching?

How Many Millions of Cellphones Are Police Watching?
Jul 13