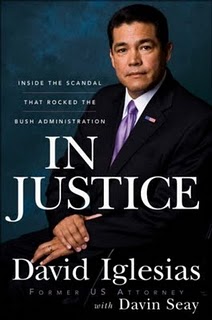 The dismissal of New Mexico U.S. Attorney David C. Iglesias in December 2006 followed extensive communication among lawyers and political aides in the White House who hashed over complaints about his work on public corruption cases against Democrats, according to newly released e-mails and transcripts of closed-door House testimony by former Bush counsel Harriet Miers and political chief Karl Rove.

A campaign to oust Iglesias intensified after state party officials and GOP members of the congressional delegation apparently concluded he was not pursuing the cases against Democrats in a way that would help then- Rep. Heather Wilson in a tight releection race, according to interviews and Bush White House e-mails released Tuesday by congressional investigators. The documents place the genesis of Iglesias's dismissal earlier than previously known.

The disclosures mark the end of a two-and-a-half year investigation by the House Judiciary Committee, which sued to gain access to Bush White House documents in a dispute that struck at the heart of a president's executive power. House members have reserved the right to hold a public hearing at which Rove, Miers, and other aides could appear this fall.

"Under the Bush regime, honest and well-performing US Attorneys were fired for petty patronage, political horse trading and, in the most egregious case of political abuse of the US Attorney corps -- that of US Attorney Iglesias -- because he refused to use his office to help Republicans win elections," Conyers said. "When Mr. Iglesias said his firing was a 'political fragging,' he was right."

In an interview with the Washington Post last month, Rove asserted that he had played no role in the development of the list of prosecutors to be fired and said he spent little time on the issues. Refuting rhetoric from Democrats, Rove told lawmakers that he "never attempted directly or indirectly to influence any particular case that was before the Justice Department." Miers made similar statements to House investigators.

In their testimony in June and July 2009, both Miers and Rove failed to recall key incidents, according to the transcripts. Miers said she could not recall events nearly 150 times in the course of her 10-hour deposition. Rove portrayed himself as receiving hundreds of e-mails a day, so that "asking me to remember replies is like asking me to remember a raindrop in a thunderstorm."

The House focused most of its attention on Iglesias, a rising star in New Mexico who came to displease his political patrons. Miers told investigators that Rove called her in September 2006, "agitated" about the slow pace of public corruption cases against Democrats and weak efforts to pursue voter fraud cases in the state. In the call, Miers said that Rove had described Iglesias as a "serious problem" and said he wanted "something done" about it. Miers testified that she called then Deputy Attorney General Paul McNulty to pass along the concerns.

According to e-mails and interviews with people familiar with the investigation, GOP figures in New Mexico believed that if Iglesias pursued public corruption cases against Democrats, it could have helped Wilson in her run for reelection.

A mid October 2006 e-mail chain that started with Wilson indirectly criticized Iglesias for not bringing public corruption prosecutions in the run up to the midterm elections. Wilson attached attaching a news report about an FBI investigation of Rep. Curt Weldon (R-Pa.) in that state as a point of contrast. The same day, Steve Bell, chief of staff to Domenici, e-mailed Rove's deputy Scott Jennings to say that it "seems like other U.S. attorneys can do their work even in election season...And the FBI has already admitted they have turned over their evidence to the USA in NM and are merely awaiting his action."

Jennings forwarded the messages to Rove and complained that Iglesias had been "shy about doing his job on [Patricia] Madrid," Wilson's Democratic opponent in the 2006 congressional race. A few weeks after this e-mail, Iglesias' name was placed on the final firing list.

Wilson's supporters had been running a television ad blasting Madrid's record on public corruption. Domenici, who accepted a Senate ethics reprimand last year for calling Iglesias to inquire about the timing of prosecutions before the 2006 election, pursued his complaints at the highest levels of the government, according to the testimony.

The longtime senator, who has since retired, wanted to contact President Bush directly, Rove testified to the House Judiciary. But Rove told investigators that he "discouraged" the senator, who went on to phone White House chief of staff Josh Bolten in October 2006, according to White House call logs. During that fall, Domenici and his chief of staff phoned Rove and other White House figures more than a dozen times to complain about Iglesias, who ultimately was placed on the firing list in November. Domenici apologized for the call last year but asserted that he never intended to interfere with a case and "never pressured or threatened" Iglesias "in any way."

The documents offer new details in connection with firings of eight other prosecutors, in a political firestorm that prompted the resignation of more than a dozen senior Bush Justice Department officials, including former Attorney General Alberto R. Gonzales and his chief of staff, D. Kyle Sampson.

In one fresh disclosure uncovered by House investigators, U.S. Attorney Todd Graves of Missouri emerged on a dismissal list a month after White House email indicated that his replacement may have been part of a broader deal between Sen. Kit Bond (R-Mo.) and the Bush administration. The e-mail suggested that Graves was replaced with a candidate favored by Bond in part to clear the way for an appointment of a federal judge from Arkansas on the 8th circuit court of appeals. Bond had objected to the White House naming a judge from outside of Missouri for the prestigious post, but he may have agreed to lift his hold on the seat after an agreement with the Bush administration, according to White House documents. Rove, who had served as a political consultant to Bond earlier in their careers, told investigators the deal was reached without his involvement and that he did not object to it.

Meanwhile, federal prosecutor Nora R. Dannehy continues to probe whether false statements or obstruction of justice charges could be lodged against anyone in connection with the dismissals and previous congressional testimony under oath about about them. Lawmakers said they had forwarded the transcripts and several thousand other pages to Dannehy, who already has interviewed Rove and Miers.

Among the documents that has raised the most interest among lawyers following the case is a February 2007 letter from the Justice Department to the U.S. Senate, indicating that Rove played no role in pushing his protege Tim Griffin for the prosecutor spot in Little Rock, Ark. The inspector general called that statement "misleading" last year. Rove denied any knowledge of the letter before it was sent and said he had no role in preparing or reviewing it. Miers told the House that statements in the letter, which was drafted by a team including Sampson, chief of staff to the Attorney General, were "inaccurate" and "incomplete."

Former Attorney General Gonzales told the Senate Judiciary Committee two years ago that "I don't recall ... Senator Domenici ever requesting that Mr. Iglesias be removed." But documents released today indicate that Rove raised concerns directly with Gonzales and that Domenici or an intermediary may have contacted the Justice Department as early as 2005 to complain.

Within two years, both Sampson and Gonzales resigned, in part because of the political furor over the prosecutor dismissals.The firing plan raised alarm bells among some in the Bush White House days after the dismissal list arrived from the Justice Department in late 2006. Deputy Press Secretary Dana Perino wrote White House colleagues in emails that she needed "an oxygen tank" and a "double shot" of air after aides reported that some of the U.S. attorneys had been conducting politically sensitive investigations of Republicans at the time of their dismissal.

U.S. Attorney Paul Charlton, of Arizona, had been moving toward an indictment of GOP Rep. Rick Renzi in that state, while Carol Lam in San Diego had expanded her probe of Rep. Randy "Duke" Cunningham (R-Ca.) to include another Republican congressman from that state as well as former CIA operative Kyle "Dusty" Foggo. Cunningham and Foggo since have been convicted of crimes. Renzi has been indicted and awaits trial.

Despite allegations by Democrats, the House investigation did not uncover smoking gun documents or testimony to conclude that Lam or Charlton were removed as part of a broader effort to interfere with investigations of prominent Republicans.

For his part, Rove told lawmakers that "I know they would not enter into the president's thinking at all. Because I know how he felt about both Duke Cunningham and Rick Renzi's behavior."

Gonzales Violated Security Rules with Spy Docs, Lied to Cover it Up