“… Imported from Pakistan, the Toxic Waste bars have been distributed in cities across the country …” 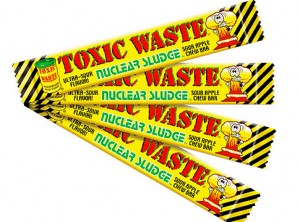 Last week, officials from California’s Department of Public Health found 0.24 parts per million of lead in the line’s cherry chew bar flavor – more than twice the legal amount of 0.1 parts per million proscribed by the Food and Drug Administration. Though the blue raspberry- and sour apple-flavored bars were not tested, the company has also pulled them from shelves “out of an abundance of caution.”

While no illnesses have yet been reported, California officials name young children and pregnant women as being most at risk.

“If consumers have eaten a lot of these bars, have been eating these bars on a regular basis, or are concerned about their exposure to these products, they should consult with their physician or health care provider to determine if further medical testing is needed,” Ingeborg Small, chief of California Department of Public Health’s Food and Drug Branch told the Daily News.

Because the body is able to clear small amounts of lead, Small added, consumers who ate one or two bars probably do not need to be concerned about their exposure.

Imported from Pakistan, the Toxic Waste bars have been distributed in cities across the country as well as through a mail order service since 2007. Before last Tuesday’s recall, the line could be found at upstate Port Crane’s Windy Hill Candle Factory and Dylan’s Candy Bar in New York City, which pulled the bar from its shelves on Monday.

Candy Dynamics asks customers with the candy to unwrap and dispose of any remaining Toxic Waste bars in the garbage.

No other Toxic Waste products were involved in the recall, which is the first for Candy Dynamics.