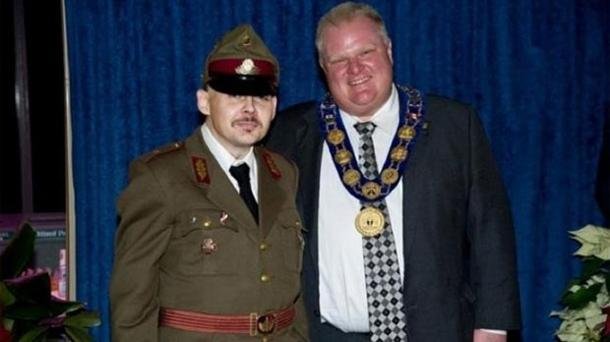 Toronto– Yet again, controversy is engulfing the Mayor’s  Office. This time, over a photograph that appeared online that shows Mayor Rob  Ford posing for the camera with an apparent neo-Nazi during the annual New  Year’s Levee at city hall.

The mayor’s communications staff is in full public relations  control.  Warren Kinsella, a Liberal columnist for the Sun News Network, published  a photograph on his blog Thursday that shows former member of the neo-Nazi  band Rahowa Jon Latvis, wearing a Latvian military uniform, standing with Rob  Ford during a meet and greet  at city hall.

“That info took me 45 seconds to locate  on the Internet. It would have taken the mayor’s staff about as much time.  Latvis doesn’t hide his name or past, particularly,” Kinsella wrote in his blog  post.  “Question: why is Toronto’s mayor palsy with a former neo-Nazi icon?”

Latvis posted the photo on his Facebook  page on May 6.  “Me meeting with Toronto’s Mayor, Rob Ford to get an endorsement  for the Latvian Homeguard — at Toronto City Hall,” Latvis wrote in the  description of the picture.

Hours after the information made the  rounds on the Internet, the Mayor’s Office issued a statement, in which it  explains that the mayor met with hundreds of people at January’s event.   According to Press Secretary George Christopoulos, Latvis asked for a meeting  with the mayor to discuss issues that were of significant importance to the  gentleman, which is a regular request from constituents.

Nearly 800 people lined up in  January for the annual New Year’s Levee to meet and greet Mayor Rob Ford and  city councillors.

In March, Latvis met with the mayor for  a short period of time to talk about transit issues.

“During both the Levee and the March  meeting, the gentleman identified himself using a name different from the one  attributed to him in the recent blog article,” Christopoulos said in the  statement.  “Once the photograph was posted online today, Mayor’s Office staff  recognized the individual as someone who had met with the Mayor at the Levee and  again in March.

The Office of the Mayor stated that  Ford was completely unaware of the allegations made against Latvis.   Furthermore, Christopoulos confirmed that any racist, hateful or offensive  remarks were not at anytime made in the short meeting.

“Mayor Ford is a strong supporter of  Toronto’s Jewish community and strongly deplores anti-Semitism in any form.”

The Centre for Israel & Jewish  Affairs also issued  a statementThursday afternoon in response to the report.  The group  explained that it fully understands that the Mayor’s Office cannot screen  thousands of people Ford meets each year.

“We want to thank Mayor Ford for his  quick response to this matter, and reiterate the fact that we consider the Mayor  a true friend of Toronto’s Jewish community,” said David Spiro, Greater Toronto  Co-Chair of The Centre for Israel and Jewish Affairs, in the written statement.