The Truth About Iraq: The Country is Out of Control 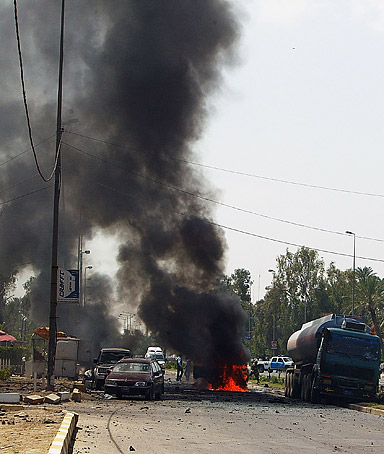 Has anyone noticed how suddenly there is little or no news coming out of Iraq? Have the “insurgents” simply melted away, have they all been paid off? With the British and US troops cowering in massive military bases outside the main cities, is Iraq all right and rosy with law and order reigning in the cities while the invasion force looks on smiling?

In a word, no. New research conducted by Professor Michael Schwarz for Project Censored* indicates that the country has spiralled out of control, that violence has reached record proportions, that well over one million Iraqis have lost their lives as a result of the US-led invasion and that there are far more Iraqis pouring out of Iraq than there are returning, despite the cozystatements to the contrary.

The findings have been published in media circles in countries opposed to the war but have been ignored by the ever more discredited “mainstream media” in the clique of countries which supported this illegal invasion, in spite of the fact that the evidence has been backed up by creditable sources, namely studies undertaken by ORB (Opinion Research Business) and by demographic scientists working for The Lancet.

Moreover, the more than one million Iraqis killed are classified as civilians. The research was carried out in 15 of Iraq’s 18 provinces (the three remaining are the most violent) and involved a poll of 2.414 Iraqis, a fifth of whom stated that they had lost at least one family member as a direct result of the 2003 invasion. 56 per cent of these, according to the report, were directly attributed not to “insurgents” but to the US or allied troops. 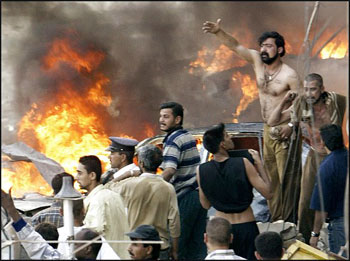 The figure also tallies with one that Schwartz discovered which had been released by the US military authorities and quoted by the Brookings Institute, namely one thousand combat missions per day for the first four years of the war in hostile neighbourhoods by the US armed forces (2003 – 2007) since when it has increased to 5,000 per day according to the report. Therefore, all is not right and rosy in Iraq.

“These patrols currently result in just under 3,000 firefights every month, or just under an average of one hundred per day”, states the report, which reveals that each patrol invades 30 Iraqi homes a day with orders to detain, interrogate or kill “insurgents” or “terrorists”. So, the torture continues, the difference being that today, nobody is speaking about it.

So horrific is the violence, according to the report, that an enormous humanitarian crisis has been caused, with over 5 million Iraqis fleeing their homes, at a rate which continues to be 100.000 per month. Therefore, how can everything be right and rosy in Iraq?

Most of the victims are not “insurgents” or “terrorists” but innocent civilians who refuse to cooperate with what they see as a foreign invasion force and Iraqi collaborators. In France, in the Balkans and elsewhere, the resistance to the Nazi horror were proclaimed as heroes. In Iraq, the truth is that…

*Project Censored selected 25 investigations undertaken by Professor of Sociology Richard Schwarz (Faculty Director of Undergraduate College of Global Studies at Stony Brook University). These reports are published in Voltaire Network. This report was conducted by Michael Schwarz and Joshua Holland, entitled “Is the United States killing 10,000 Iraqis every month?”