The "Truest Truth" About Adolf Hitler"

A new German film detailing the life of Adolf Hitler has broken new ground in the country by lampooning the former leader. “Mein Fuehrer: The Truly Truest Truth About Adolf Hitler” depicts him playing with toy battleships in his bath and dressing his dog in a Nazi uniform. Director Dani Levy explains the comic approach to Hitler was not meant to trivialise the horrific events of World War Ii, but rather help viewers re-evaluate the atrocities. … Continued http://www.postchronicle.com/news/original/article_21257714.shtml ——- ‘Fuehrer’ Tells Hitler Story With Humor Jan 1, 5:27 PM EST By GEIR MOULSON Associated Press Writer … His propaganda minister, Joseph Goebbels, finds a solution in Adolf Gruenbaum, a fictional Jewish actor who coached Hitler at the beginning of his career and is now in a concentration camp. “We need someone who can ignite our Fuehrer’s greatest strength – and that strength is his hatred,” Goebbels explains. Gruenbaum uses the mission to try to kill Hitler, but fails. So he puts him through humiliating exercises, such as crawling about barking like a dog. The farce broadens when Hitler’s barber accidentally shaves off half his mustache; the enraged dictator shouts himself hoarse and Gruenbaum has to lip-sync the big speech, but deviates from the script to make Hitler look even sillier. 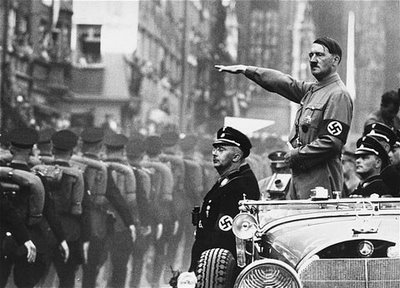 All this would have been unthinkable a decade ago, when Germans were engrossed in “a very serious appraisal of Nazism” and how to commemorate its victims, said Paul Nolte, a professor of contemporary history at Berlin’s Free University. Today they find it “easier to go beyond that and enter other genres,” he said. Meanwhile, the German public’s distance from the events has grown as the World War II generation dwindles. Levy, 49, points to Italian Roberto Benigni’s Oscar-winning “Life is Beautiful” as a taboo-breaking forerunner – about a father who uses desperate and hilarious means to shield his son from the horrors of a Nazi death camp and convince him it is all an elaborate game. “I think it is important that we create new pictures of our own, also of the Holocaust or Nazism, and not always work off the old, realistic pictures, because I think that just makes us lazy and tired, and we don’t learn anything from it,” said Levy. “Downfall” divided critics, with some questioning whether Hitler should be given a human portrayal and objecting that it glossed over the broader historical context, including the Holocaust. The critics haven’t yet commented on “Mein Fuehrer…” but the weekly Der Spiegel says the new wave of films about Hitler is demonstrating “a need to break the myth down to a normal human … that makes him more everyday, perhaps easier to understand, in any case smaller.” “The ultimate way to shrink a myth is to make it laughable,” it added.