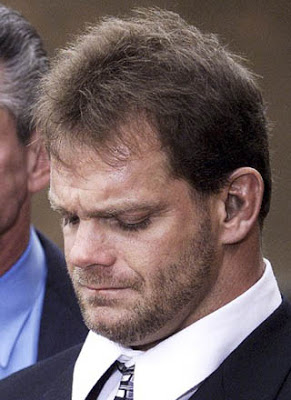 There were scattered news reports this morning that CHRIS BENOIT LIVED UNDER THE CLOUD OF A DEA STEROID INVESTIGATION FOR A FEW WEEKS – THEN THE FAMILY WAS BRUTALLY MURDERED.

None of the rumored motives panned out, not even “roid rage” (see previous posts).

And someone clicking into Wikipedia seems to have known.

Did the RUSSIAN MAFIA (who are IMBEDDED WITH OPERATION UNDERGROUND ((WW II OSS-recruited, now CIA-)) ITALIANS) kill the Benoits, and arrange the murder scene in such a way that Chris Benoit would take the fall?

The following article applies to bicycle racing, but the market in anabolic steroids includes a variety of sports and applies equally to professional wrestling. Organized crime explains the many mysteries connected to this case, lurks in the background of the murders, and needs to be TAKEN INTO CONSIDERATION by any researcher following the case closely – and note who has been in bed with ARNOLD SCHWARZENEGGER along the way:

… Donati also claimed that the Russian mafia controls much of the world’s trade in anabolic steroids, and stated bluntly that the Russian pharmaceutical industry is predominantly controlled by the mafia. He named Thailand, India, Australia, Greece, Mexico, China and Russia as nations heavily involved in the doping trade, and contested that the connection with recreational drugs through mafia involvement makes the illegal trade in doping even more dangerous.

Donati estimates that trafficking over the Internet could be responsible for 50 percent of all sales of performance-enhancing substances by 2007.

Mafia involvement in doping, he asserted, has its roots in the 1970’s when crime organizations were financing pornography and bodybuilding films such as the Arnold Schwartzenegger’s “Pumping Iron.” Much of the California Governor’s success, claimed Donati, is due to steroids, which he has never denied taking.

Donati also referred to another former abuser who launched his career through the trade, David Jenkins – a former European 400m Champion 1971 who served a prison term for steroid smuggling in 1988 is now a multi-millionaire, holding a top position with one of North America’s largest ‘protein supplement’ companies.

A recent case in which steroids worth 10 million US dollars were seized on the Arabian Peninsula led Donati to believe that up to 40 similar shipments could have got through – probably destined for male Arabic users in their teens or in their early twenties. He also stated that there is strong reason to think that local Iraqis are selling steroids to US servicemen.

The issues were further clouded by his examination of the different motivations for the consumption of black market drugs and urged his audience to distinguish between performance-enhancers, image-enhancers, military usage, usage in show business and the distorted use of therapy.

Sandro Donati concluded his speech by referring to what he saw as a golden opportunity lost twelve years ago, when a major 19-nation conference in Prague hosted by the US Drug Enforcement Administration (DEA) had the opportunity to make major inroads into the problem.

However, Donati stated that none of the organizations attending the conference has gone on to formulate its own policy relating to the smuggling of performance enhancing drugs. Interpol, Europol, the EU, The WHO and even WADA all need to formulate and coordinate their own individual policies on doping smuggling, he said.
In addition, he regretted the fact that very few countries have specific rules and penalties relating to the smuggling of performance-enhancing steroids and other drugs, while specific information on smuggling is conspicuously absent from the websites of all the organisations he named.

BALCO – the scandal that changed the US view on doping

In the wake of the recent Balco ‘doping lab’ scandal in the USA, discussion at Play the Game turned to current trends in the fight against doping, with reference to the events in San Francisco which brought the new ‘designer steroid’ THG to world attention.

Elliott Almond, Olympics and Enterprise Reporter for the San Mercury News of San Francisco told conference participants that the Balco (an acronym for Bay Area Laboratory Cooperative) scandal could be compared to the Ben Jonson affair in Canada for its effect in forcing the nation to confront the relationship between national pride, commercialism and doping.

The Balco scandal emerged after revelations that the lab’s founder, Victor Conte, had carved a niche for himself and others by providing celebrity US athletes with performance-enhancing drugs, most prominently THG which was then unknown to anti -oping fighters.

The scandal embroiled many famous athletes including sprinters Tim Montgomery and Kelly White. However, Elliott Almond told Play the Game that it was Balco’s connection with the ‘all American’ sport of baseball which really set the pulses running in the US media.

He stated that the sight of familiar baseball players facing legal proceedings provided a wake up call to sports journalists, many of whom were finally forced to take doping seriously. As a result, he stated, fundamental questions about the nature of elite sport are now being aired.

Elliott Almond went on to ask whether sport can simply be classified as entertainment or whether it represents some further intrinsic value. Playing the devil’s advocate, he questioned whether the ban on drugs should not just be seen as just another arbitrary rule in sport, to be broken without fear of legal action.

Next to take centre stage was Travis T Tygart, Senior Managing Director at the US Anti Doping Agency (USADA) who spoke of his personal experience with the Balco investigation, which included sifting through 9,400 pages of evidence.

He urged anti-doping fighters not to forget that they are performing a valuable service by protecting the rights of ‘clean’ athletes to compete on a level playing field, and gave examples of athletes who have been cheated out of gold medals due to rivals using doping.

Mr Tygart also listed a number of professional wrestlers who have recently died of steroid abuse after competing in a ‘sport’ seen purely as entertainment. He pointed out that sporting values and the right to clean competition have now become mainstream political issues, as demonstrated by the introduction of new legislation such as the Integrity in Professional Sports Act in the USA.

He also examined the conflict between promoting and policing by governing bodies and asserted that independence is essential in anti-doping research, education, testing and results management. He claimed that the ‘new frontier’ in the fight against doping is the ability to bring a successful case based on ‘non-analytical’ positive tests such as evidence of trafficking or possession.

Anders Solheim, CEO of Anti Doping Norway, also spoke of the search to define the term ‘guilty of doping’. He spoke of the difficulties in initiating effective ‘no notice’, testing, lack of whereabouts information and the continuing problems faced by anti-doping inspectors in crossing national borders unhindered. He also asked a number of awkward questions, such as how we treat sportspeople using performance-enhancers that are fully legal in society.

Finally, Rasmus Damsgaard, doping researcher at the Copenhagen Muscle Research Centre, spoke of the chemical structure of THG, and pointed out that the substance is not difficult to synthesize and produce. However, he added that the alleged performance enhancing effects of THG have not yet been proven, as most athletes found to be using the steroid have been found to be using other illegal substances too.