The Reemergence of Donald Rumsfeld Begins 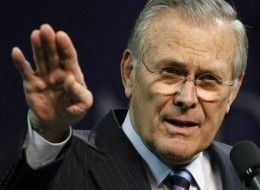 Details of Donald Rumsfeld’s forthcoming book tour are out, as the former defense secretary plans to sit for a series of interviews with ABC News in early February, the network announced Thursday.

Rumsfeld — who served as defense secretary in two administrations — will make his first TV appearance since his November 2006 resignation on “World News with Diane Sawyer” on Feb. 7.  “Good Morning America” anchor George Stephanopoulos will conduct a live chat with him Feb. 8, ABC said.

Rumsfeld’s book,Rumsfeld’s book, ” Known and Unknown,” is set for release the same week. It is set to draw upon hundreds of never-before-seen government documents, guaranteeing that the 832-page tome will make news. He reportedly bypassed traditional FOIA channels to secure access to many of the documents.