The Neo-Nazi Creativity Movement Is Back 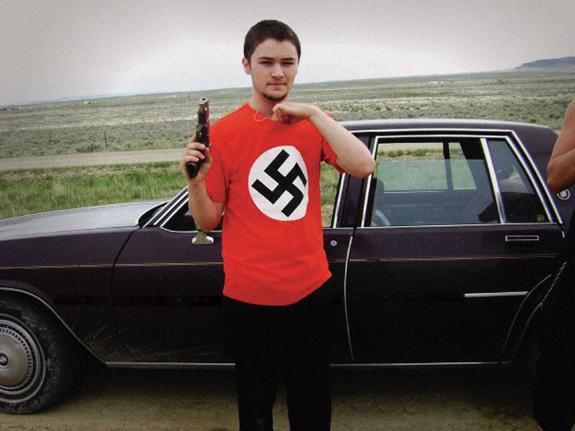 Montanan Neo-Nazi Allen Goff, an aficionado of the "holy books" of Creativity, convinced a jury last spring that he'd shot a Latino youth by accident.

One day last May, Travis McAdam, executive director of the Montana Human Rights Network, was getting ready to make a presentation on the white supremacist Creativity Movement in a Montana museum when a belligerent young man accosted him. “Do you know who I am?” the man demanded. McAdam most certainly did. Facing him was Allen Goff, a rising figure in the neo-Nazi group who two days earlier had been acquitted of a felony charge of wounding a Latino teen in a shooting that prosecutors contended was racially motivated.

Goff, only 18, was asked by McAdam to leave the museum and complied. But the incident in Billings was significant, McAdam says, suggesting that Goff and the once-moribund group behind him “feel more emboldened now.”

The fact that Goff or anybody else is active at all in The Creativity Movement is surprising in and of itself. The Creativity Movement has survived name changes, the death of its founder and the imprisonment of his successor. It has lived through subsequent schisms, competing claims of leadership, and, frequently, no apparent leadership at all. Most of its all-important “holy books” have been destroyed, turned into an anti-racist art project by McAdam and others — the same exhibit that McAdam was working on when confronted by Goff this spring.

But each time the neo-Nazi organization has appeared to be on the verge of death, it has rallied. Today, while its health is hardly robust and there is a far larger competing neo-Nazi group (the Detroit-based National Socialist Movement), there are signs that the Creativity Movement is growing again. From 11 chapters in 2008, the group had grown to 14 by the end of 2009. Of those, eight are based in McAdam’s home state of Montana, which has seen a rash of leafleting and other activity this year from Goff and his friends in The Creativity Movement.

It’s almost impossible to say just how many people belong to The Creativity Movement, which is now headed by James Logsdon of Zion, Ill. McAdam estimates there are no more than 40 to 50 members in his state. But he says that Americans should be concerned. “There is a new generation of Creators in Montana,” he says — younger than their predecessors, increasing in numbers, and working to ally themselves with other racist groups. Most importantly of all, McAdam warns, is “you have this history of [Creativity] activists becoming violent.”

‘Racial Holy War’
Ben Klassen, a one-time Florida state legislator and inventor of the electric can opener, founded the Church of the Creator (COTC), the Creativity Movement’s predecessor, in 1973. From the start, it was imbued with a Nazi-like credo: Whites are a superior race, responsible for virtually all creative enterprises in human history, and non-whites (“mud races”) and especially Jews intend to subjugate whites. These views were elucidated by Klassen in some 13 tedious books, among them such racist classics as The White Man’s Bible and Building a Whiter & Brighter World.

“Now the White Race has a racial religion of its own and we call it CREATIVITY,” Klassen wrote at one point.

But it was a “religion” with no deity and very little philosophy outside an earnest belief in unprocessed foods. The Creator is not an unseen higher being — he or she is simply a white who subscribes to “Creativity.” Creators don’t believe in “spirits, gods and demons.” They do believe “that our race is our religion.”

Over the years, many of Klassen’s followers responded to his insistent call for a “racial holy war” — “RaHoWa!” remains the organization’s primary war cry — and were sent to prison for violent, racially motivated crimes. In 1991, a Creator named George Loeb murdered a black Gulf War veteran, Harold Mansfield, in Florida and went to prison for life.

Klassen was fearful that the Mansfield murder would land his group in court with the Southern Poverty Law Center (SPLC), which had successfully sued a number of hate groups for the violent actions of their members. Aging, he also was interested in turning over the COTC to younger leadership.  To protect the COTC’s assets from a possible SPLC case, Klassen sold the COTC headquarters for a price far below its fair market value to fellow racist William Pierce, the head of the neo-Nazi National Alliance. After giving Rudy “Butch” Stanko (then serving time for intentionally selling tainted meat to public schools) a trial run as the leader of the COTC, Klassen turned over the reins of the group to Rick McCarty, a con man from Florida. Believing his life’s work was safe in McCarty’s hands and depressed over the recent death of his wife, Klassen committed suicide in 1993.

As Klassen had predicted, the SPLC eventually filed suit against the COTC over the Mansfield killing. McCarty, more interested in using the COTC to make money than to promote Klassen’s beliefs, chose not to defend the case, and the SPLC obtained a $1 million default judgment. The SPLC then brought an action against Pierce, claiming that he knew that Klassen had sold the COTC headquarters to him for a fraction of its value to keep it safe from a possible claim from the Mansfield family. A jury agreed, awarding Mansfield’s family $80,000, the amount by which Pierce had profited from the fraudulent, bargain-basement sale from Klassen. McCarty, in the meantime, allowed the COTC to wither.

Around the same time, in 1993, eight individuals with ties to the COTC were arrested in Southern California for plotting to bomb a black church in L.A. and assassinate Rodney King, whose videotaped beating by white police officers in 1991 had sparked national outrage. Later that year, Jeremiah Knesal, a member of the COTC, was found with weapons, ammunition and hate literature in his car; he later confessed to his involvement in a July 1993 firebombing of an NAACP office in Tacoma, Wash. 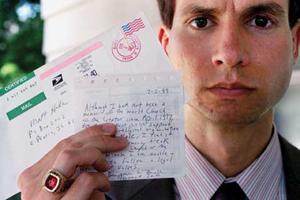 Matt Hale
In 1995, Matt Hale arrived on the scene. Smart, energetic, and media friendly, he resuscitated the COTC and, in a sign of his ambitions, changed its name to the World Church of the Creator (WCOTC). Composed largely of racist skinheads, the Hale-led “church” grew from 14 chapters in 1996 to 88 in 2002, making it, for a time, the neo-Nazi group with the largest number of chapters in America.

Meanwhile, its members continued to engage in criminal attacks on minorities in Florida and elsewhere, including, most infamously, a racist murder spree carried out in Illinois and Indiana in 1999 by Benjamin Nathaniel Smith. Smith, enraged that Hale had been denied a law license because of his political views even though he’d passed the bar exam, murdered an African American and a Korean American and wounded nine other people before killing himself. Hale denied even knowing Smith immediately after the killings. But he was lying — it turned out that he had named Smith “Creator of the Year” just months before.

But the worst blow of all came when Hale was arrested in January 2003 and charged with soliciting the murder of a federal judge who had ruled against him and his group in a trademark infringement complaint. (A Pacific Northwest church with anti-racist views had copyrighted the World Church of the Creator name years before and was demanding that Hale’s group stop using it.) The following year, Hale was convicted of four felonies and sentenced to 40 years in prison.

That seemed to fatally cripple the group, which had no obvious successor to Hale. Those who remained associated with it were forced by the outcome of the federal case to begin using a different name, and they selected The Creativity Movement. But the group was extremely weak, with various individuals vying for Hale’s scepter unsuccessfully.

Eventually, in 2007, one group of former WCOTC members formed an alternative organization called the Creativity Alliance. The Creativity Alliance viewed Klassen as its founder, to be sure, but eschewed the goal of a future race war and also decided that “it is in the best interests of Creativity for us to adopt a policy of non-participation in the ‘White Power’ social scene.” Still, the Creativity Alliance, which remains active today with eight chapters in seven states, does not seem far removed from its origins. One article on its website rants about “niggers” and “the hideous Jews” and ends with “White man fight!”

The Creativity Alliance’s declaration of non-participation in the movement — whatever that may really suggest — does not mean that more active Creators have gone away. On the contrary, they are showing definite signs of life.

Travis McAdam has a theory of how The Creativity Movement keeps reviving against all odds — Ben Klassen’s books. “The fact that these foundational texts continue to circulate and provide an ideological rudder … helps to keep the message alive,” he says. “Ben Klassen was not a gifted writer, but [he] was a prolific one.”

That’s why McAdam’s Montana Human Rights Network jumped at the chance when, in 2003, an ex-Creator offered the group 4,100 of Klassen’s hard-copy books for a mere $300. The network purchased the books and provided them to police departments, scholars and other non-racists with an interest. Teaming up with a Helena art museum, it also gave thousands of copies of the books to artists for an anti-racist exhibit. The books were pulped, cut up and made into other objects and shown around the state. It had to be a low moment for Creators, who saw their version of Holy Scripture being ridiculed publicly.

The loss of the physical books, which can still be downloaded and printed out at The Creativity Movement’s website, has not wrecked the group, however. In fact, in recent months Creators have distributed literature in several cities and staged rallies in Kalispell and Bozeman, where they carried signs and flags.

Another sign of a limited Creativity resurgence is criminal violence.

In August 2009, Allen Goff, who was 17 at the time, was charged as an adult after shooting another teenager in the leg. (Only three months earlier, he had been named “Creator of the Year” by The Creativity Movement.) Despite his youthfulness, Goff was at that point already a four-year veteran of the white supremacist movement. The Latino teen he shot told police that he and Goff used to be friends but parted ways over Goff’s racist ideology.

In the end, Goff, who claimed the shooting was accidental, pleaded guilty to a misdemeanor charge of carrying a concealed weapon — brass knuckles. But he went to trial on a charge of felony assault; a jury acquitted him of that charge after a judge ruled that prosecutors could not introduce evidence of his racist activities, including pictures of Goff with guns, a swastika and racist literature. He was sentenced to six months of probation and a fine of $150.

In Montana, the current epicenter of the Creativity movement, Goff and his mainly young compatriots now seem to be enjoying some real success in the trial’s aftermath. “He has, and some of the people he has recruited have, an edge in that they can recruit on a peer level,” McAdam says. Since Goff’s acquittal, he adds, “there has been a lot more chatter online. We’ve always felt he’s one of the ringleaders.”

The resurgence of The Creativity Movement and other white supremacist activity in Montana — where another racist group, Pioneer Little Europe, showed a pro-Nazi film at the Kalispell library in April — shows no signs of abating, McAdam says. And that may only be a sign of bigger things.

“I think what’s going on in Montana … is a microcosm of what is happening nationally,” McAdam says. “We just have a close-to-the-ground view.”