Yesterday, Rep. Peter King (R-NY), the chairman of the House Homeland Security Committee, held a four-and-a-half hour hearing titled, "The Extent of Radicalization in the American Muslim Community and that Community's Response," which targeted the entire Muslim American community for supposedly aiding and abetting domestic radicalization. Many in the civil rights community urged King to not focus exclusively on American Muslims, noting that doing so would not only serve to shore up animosity against America's law-abiding Islamic community and empower extremists, but that it would also ignore the deep threat to America from non-Muslim terrorists. But King ignored these criticisms and continued with his hearing anyway, using it as a platform to claim that Muslims are failing to cooperate with law enforcement and homeland security officials. Yet Democrats on the committee, as well as several of the witnesses testifying, turned the tables on King, debunking his smears and demonstrating the fact that the Muslim American community is an ally in the fight against terrorism, not an enemy.

THE BACKGROUND: King, who became the chairman of the House Homeland Security committee in January, announced the hearings months ago. Since then, a broad coalition of civil rights advocates, national security experts, and other Americans who want an America that is both secure, free and tolerant have come together to condemn the hearings and the singling out of the Muslim American community. As time went along, panelists chosen by King began to drop like flies, as Americans realized the extremism that these figures represented. Ayaan Hirsi Ali, who asserted that "we are at war with Islam," was the first to go. Next, Walid Phares was dropped from the witness list following an investigation of his past as a member of a violent Lebanese Christian militia that was implicated in atrocities. And of course, King himself was a vocal supporter in the past of the Irish Republican Army, which engaged in terrorism that led to the deaths of countless people, including one American. Throughout the process of putting together his panel, King claimed that his goal was to single out the Muslim American community because "it makes no sense to talk about other types of extremism, when the main threat to the United States today is talking about al Qaida." Yet a January 2011 terrorism statistics report from the Muslim Public Affairs Council compiled using publicly available data from the FBI and other crime agencies -- finds that terrorism by Muslim Americans has only accounted for a minority of terror plots since 9/11. Since the attacks on the Twin Towers and the Pentagon, Muslims have been involved in 45 domestic terror plots. Meanwhile, non-Muslims have been involved in 80 terrorist plots. King's hearing failed to look at some of the root causes of Muslim radicalization, like the exploitation of Muslim grievances about U.S. foreign policy by extremists, the social marginalization of extremists, and ways to prevent radicalization -- which involve close cooperation and introspection within and between Muslim American communities and law enforcement. By excluding such issues, King's hearing exposed itself as nothing more than a witch hunt before it had even begun. 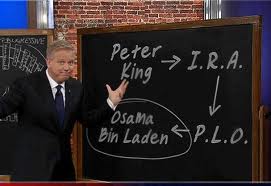 KING'S FALSE CLAIMS: King's own words at the hearing were full of misstatements and outright lies. In his opening statement to the committee, King claimed that the reason he decided to single out Muslim Americans is because the threat from them was particularly unique. He explained, "Indeed, by the Justice Department's own record, not one terror-related case in the last two years involved neo-Nazis, environmental extremists, or anti-war groups." King's statement would be surprising to residents of Fall River, MA. This past December, white racist and neo-Nazi sympathizer Justin Vieira "broke a natural gas line and threatened to blow up a three-decker" house and was arrested shortly after by police. Additionally, there have been at least four other neo-Nazi or neo-Nazi sympathizer terror plots since September 2009. Throughout the hearing, King's Democratic colleagues -- including Reps. Bennie Thompson (MS), Sheila Jackson Lee (TX), and Laura Richardson (CA) -- brought up the fact that the congressman said in 2007 that there are "too many mosques in this country," prompting him to say that he "never said" such a thing, a clear lie as ThinkProgress documents in a video fact check.

TOLERANCE FIGHTS BACK: Throughout the hearings, King's Democratic colleagues and the witnesses called before the committee spoke eloquently on behalf of the American Muslim community and its contributions to battling radicalism. Rep. Keith Ellison (D-MN), the first Muslim ever elected to Congress, made headlines when he gave his emotional testimony in which he recounted the story of Muhammad Hamdani, a Muslim first responder who gave his life saving people trapped in the Twin Towers on 9/11. "Muhammad Salman Hamdani was a fellow American who gave his life for other Americans. His life should not be defined as a member of an ethnic group or a member of a religion, but as an American who gave everything for his fellow citizens," said Ellison. Hamdani's mother, Talat Hamdani, told Politico last week that she along with two other family members of 9/11 victims had been promised a meeting with King -- where she planned to urge him to cancel the hearings -- but that he failed to show up at the meeting. In addition to pointing out that King himself has expressed extreme anti-Islamic sentiments before, many of King's Democratic colleagues expressed solidarity with American Muslims. Jackson Lee said the effort was nothing more than "an effort to demonize" Muslims. Rep. Richardson said the hearings were "discriminatory" and "questioned why other House committees weren't holding hearings on threats to American children involving other religions, a veiled but some say clear reference to the sex abuse scandal in the Catholic Church." One of King's own handpicked witnesses, Abdirizak Bihi, who was an uncle of a radicalized Muslim son, essentially debunked the chairman's assertion that Muslim Americans are not cooperating with law enforcement, recounting one story of how the Somali Muslim community stepped forward to report its own radicalization, saying, "We the Somali community should get the credit!"

Remember now that we found nanothermite in the rubble of 9/11 and understand the motivations of the many parties mostly associated with Bush who did the demolitions, we should remember that once again, THE RIGHTWINGERS ARE THE MOST DANGEROUS DOMESTIC TERRORIST THREAT THAT WE FACE.