It all began, back in the day, with the Laffer Curve.

In the early ’70s, economist Arthur Laffer and his acolytes began preaching a very simple idea: By cutting taxes — always a politically popular move — it was possible to actually increase government revenue. As the story goes, Laffer illustrated the seemingly magical concept for Dick Cheney, among others, by drawing the curve on a cocktail napkin in a Washington hotel bar. (The versions published here, created by yours truly, attempt to honor the original in their crudeness. At least that’s my excuse.)

The idea was quickly seized upon by leading Republican conservatives, who used it to justify major tax cuts in the early ’80s and have continued to do so ever since, under the rubric “supply-side economics.” And under the right conditions, the argument behind the Laffer Curve does make some sense.

Without a doubt, excessively high taxes can strip needed capital from the private economy, reducing investment and spending and thus curtailing growth. By cutting taxes, you can theoretically free up capital and encourage investment, and the resulting growth will generate more government revenue than you had in the first place.

The theory is illustrated by Figure One, to the right. Pay particular attention to the part of the curve labeled C. As the tax rate moves to the left and gets lower, you see government revenues rising. That process continues until you reach the sweetspot, labeled Point A, which in this illustration is at roughly 25 percent.

Point A represents nirvana, the point at which you have both the highest possible government revenue generated by the lowest possible tax rate.

But there’s a downside to the Laffer Curve as well. Note that if you move beyond Point A into the region marked B, tax rates continue to fall but this time revenue plummets. Region B represents the part of the curve where cutting taxes does NOT generate enough growth to compensate, and in fact may not generate any growth at all.

So the trick, it would appear, is to identify where Point A is. But that’s difficult to impossible, in part because the location of Point A probably varies wildly from country to country, era to era and tax system to tax system.

Figure Two, for example, offers just as plausible a depiction of the tax rate’s impact on revenue as Figure One. In this example, Point A, the sweetspot, is at roughly 60 percent; any reduction in rates below that point would put you into Region B, where government revenues would drop. (NOTE: The percentages used here are for discussion purposes only and are not intended to reflect actual taxation or its impact).

But the problem is, something very destructive happened in the translation of this economic theory into political language and policy. In the popular conservative version of the Laffer Curve, no debate over the location of Point A is even tolerated, because cutting tax rates is said to ALWAYS generate more government revenue.

In effect, Region B, the part of the curve in which lower tax rates produce sharply lower government revenue, has simply been banished from the discussion. 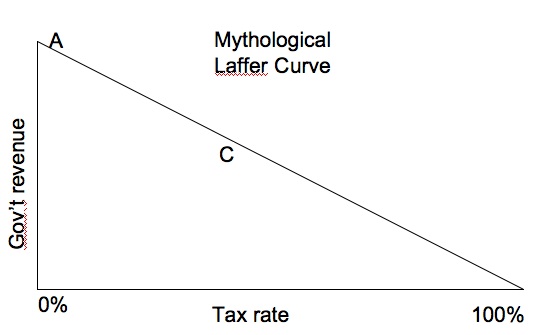 Once you do that, however, the Laffer Curve no longer functions as a curve at all (see Figure Three). If lower rates always produce more revenue, as the right likes to claim, the Laffer Curve becomes the Laffer Line, and Point A, the sweetspot, stands at a tax rate of zero.

While that makes no sense mathematically, politically it is an enormously appealing notion. It’s like telling someone with an obesity problem that the best way to lose weight is to always eat more ice cream — more times than not, their eagerness to believe overwhelms any skepticism.

Or to paraphrase the argument:

“Cutting taxes doesn’t add to the deficit, it’s how we fight the deficit!! Less is more, don’t you see?? Reagan proved it. Oh, and hand me that chocolate sauce and whipped cream, will you?”

2) The Laffer Curve in Real Life

Ever since the Reagan administration, supply-side economics has been at the core of Republican economic philosophy. Every GOP candidate, at every level of politics, has to swear allegiance to the theory if he or she hopes to retain credibility with the party base.

Now it’s time to look at how the theory has worked in practice, focusing on the two separate experiments with supply-side economics that we’ve run in the past 30 years.

The first began with the Reagan tax cuts in 1981 and ran to 1993. The second began in 2001, with passage of the Bush tax cuts. And in between of course, we had the Clinton administration, which took a very different approach. In 1993, President Clinton pushed a major tax hike into law in order to close the deficit, the very antithesis of supply-side theory. And by the end of his term, the deficit had indeed been eliminated, if only temporarily?

So how do we gauge the effectiveness of supply-side theory in practice? I propose we look at three specific measures:

(Note: All data below have been adjusted to account for inflation.)

After the ‘81 Reagan tax cuts, private nonresidential investment over the next seven years grew at an annual rate of 2.8 percent.

After the ‘93 Clinton tax hike, private investment over the next seven years grew annually at 10.2 percent.

From 2001-2009, federal revenue decreased by 13.9 percent. (Even if you don’t include the deep recession year of 2009 — you might say we’re invoking the mercy rule — revenue increased just 3.3 percent over the eight years of Bush’s presidency.

In conclusion, in all three categories central to the claim of supply-side proponents, the economy performed significantly better in the wake of tax increases than it did in the wake of major tax cuts.

Confronted with such data, the first word out of a supply-sider’s mouth is usually “But ….,” followed by a series of rationalizations for why the economy didn’t perform in real life as supply-side theory dictates it should have. Some of those excuses, such as the fact that the economy under Clinton benefited by the high-tech boom, are legitimate. Others, such as the claim that Bush had to deal with the economic fallout of Sept. 11, are not. There was no major economic fallout in the wake of the terror attacks.

And the excuses themselves, whether lame or legitimate, further undercut the lofty claims of supply-side advocates. If the economic benefit of major tax cuts is so weak that it can be washed away by larger trends, to the point that you can find no real evidence of it in the data, and if the economic damage of tax increases is so minor that it too can’t be found in the data, then what exactly is this supply-side theory about in the first place?

I mean, other than to serve as a handy rationalization for perpetual tax cuts.