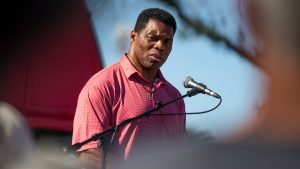 ATLANTA — U.S. Senate candidate Herschel Walker talked about having a shootout with police, according to a 21-year-old police report obtained by the Associated Press. The report sheds new light on incidents of violence that the former football star has acknowledged as part of a sometimes-troubled past. Walker hasn’t disputed incidents of domestic violence, attributing them to episodes of mental illness. This report adds new details that Walker’s opponents say voters should find troubling.

Police described Herschel Walker as the "suspect" in a July 2011 incident detailed in an Irving, Texas police report – where a girlfriend said Walker allegedly threatened to “blow her head off” during a dispute.

Ten years earlier, in the same Dallas suburb, Walker’s therapist told police Walker was “volatile” and armed with a pistol, according to the Associated Press.

That police report says Walker “talked about having a shoot-out with police,” according to the AP. Walker was not arrested nor charged in either incident.

Now the former UGA and NFL football star is the Donald Trump-backed candidate for the U.S. Senate in Georgia.

"I don’t think there’s a statute of limitations for threatening police. That’s a very serious charge and I think it’s actually a disqualifying charge, just in my opinion," Gary Black said, the state agriculture commissioner running against Walker in the GOP primary.

Because of Trump’s backing, Walker appears to be the candidate to beat – despite incidents like those in Texas.

"It does trouble me, but that’s something we’ve all, as voters, have got to decide," state Rep. Robert Dickey said (R-Musella).

Republicans are mostly unwilling to criticize Walker – including some like Butch Miller, who is running for Lieutenant Governor.  Asked if he had any concerns about running alongside Walker in 2022, Miller laughed "no concerns whatsoever. I just want all these other candidates to ride my coattails."

Dickey added that he's "glad it came out now instead of later. Our Republican voters can take that into consideration when they go to the polls in May."  He added he does not think such an incident would disqualify Walker.

The absence of concern appears to reflect a new attitude among GOP voters who supported Trump in 2016, even after he was heard in an Access Hollywood video boasting about sexually assaulting women.

Black said "there’s no doubt about it" affecting the attitudes of voters. Black voted for Trump twice, yet expects voters to hold Walker accountable.

"The record of abuse of women, the record now of threats to law enforcement officers and threats of shootouts – my goodness what else is there?" Black said Friday.

Walker’s campaign told the AP that it’s the media’s fault that Walker’s past is getting continuing scrutiny.