"...  A very dark individual. ... He would be labeled fringe by past Republicans, including a great American hero, Dwight Eisenhower. The Tea Party is just the same John Birch Society that Eisenhower thought was stupid. ..." 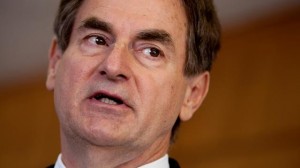 It is unfortunate that Senator Lugar, not a great man by any means, has been  replaced by an odious man as the Republican nominee. Truth is, Richard  Mourdock is a fringe guy. Maybe that will help the Democrats once people  realize what this weirdo stands for.

We know that this Tea Party candidate thinks that social security and medicare are  unconstitutional. He would be labeled fringe by past Republicans, including a  great American hero, Dwight Eisenhower. The Tea Party is just the same John  Birch Society that Eisenhower thought was stupid.

This Mourdock fellow thinks that people should be more partisan in Washington  DC, and is obvious not interested in compromise for the good of the nation.

And  Marketwatch reports that the banks got rid of Lugar because he  voted against fees for the banks and for retail in their fight against the  banks. I have stated for over a year that the Tea Party leaders are in the back  pockets of banksters. I hope people would realize this and come to their  senses.

Mourdock tried to block Chrysler's bankruptcy restructuring that could have  endangered 124,000 high paying Indiana jobs. I suggest that this guy is so in the pockets of the bankers that the state should be alarmed.

Don't be deceived, the Tea Party express, which is backing Mourdock, has  nothing to do with the Tea Party rank and file, who surely cannot believe the  radical ideas of this demagogue.

Mourdock needs to realize that social security is NOT WELFARE! Only a pervert  would say that Social Security is welfare. Even without the social security  trust fund, it is self sustaining at over 70 percent of the benefits.

Regarding helping the poor, this is generally left to the states, and that is  in keeping with the constitution. If it were a Federal Government mandate,  everyone would get the same welfare in each state. That is not what happens. So,  this bozo, Mourdock, is against helping the poor.

Yet the Founding Fathers did not hold the states to the same requirement to  stay away from helping the poor.

And clearly, the Founding Fathers looked to the 10 Commandments for a guide.  One wonders why they didn't look to  the cases of welfare and help provided to the inhabitants of Old  Israel, such as farmers being required to provide part of their  farms for the poor.

On this subject, you can forgive the Founding Fathers for being unduly  influenced by the classic liberals of the time, such as John Locke. But, we have  since been "enlightened" to understand that the libertarian invisible hand of  self interest does not always work. The housing bubble was proof of that.I don't  think Mourdock is sophisticated enough to understand this issue. Or if he is he  won't tell you or me.

Apparently, Mourdock would rather side with the banks in getting rid of Lugar  since he supports the freedom of banks to use their power against the people and  the retail industry.

One would hope that people will come to their senses and realize that the  libertarian/Tea Party Mourdock is a very dark individual. His  claims of liberty and freedom ring hollow when we look at the core  beliefs of the man. It is tough to be a right wing so called "Christian" when  you are libertarian, as the two should be mutually exclusive. Mourdock has  muddled the political landscape enough to appeal to both, like he is part of  both movements.

The right wing charade continues. And this assault on politicians by the  banks continues.

Hey Alex, the nazis at homeland security won’t share this one either. See how they are. . . .