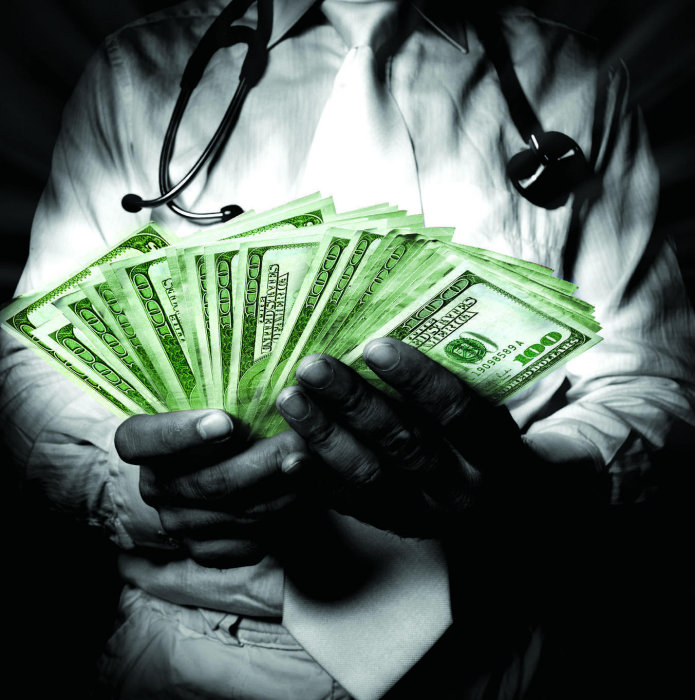 As medical schools wrestle with how to keep drug companies from corrupting their faculties, Stanford University is often lauded for its tough stance.

The school was one of the first to stop sales representatives from roaming its halls in 2006. It cut off the flow of free lunches and trinkets emblazoned with drug names. And last year, Stanford banned its physicians from giving paid promotional talks for pharmaceutical companies.

One thing it didn’t do was make sure its faculty followed that rule.

A ProPublica investigation found that more than a dozen of the school’s doctors were paid speakers in apparent violation of Stanford policy – two of them were paid six figures since last year.

Dr. Philip Pizzo, the dean of Stanford’s medical school, sent an e-mail to medical school staff last week calling the conduct “unacceptable.” Some doctors’ excuses, he wrote, were “difficult if not impossible to reconcile with our policy.”

He was not the only school official caught by surprise.

Conflict-of-interest policies have become increasingly important as academic medical centers worry that promotional talks undermine the credibility not only of the physicians giving them, but also of the institutions they represent. Yet when it comes to enforcing the policies, universities have allowed permissive interpretations and relied on the honor system. That approach isn’t working. Many physicians are in apparent violation, and ignorance or confusion about the rules is widespread.

As a result, some faculty physicians stay on the industry lecture circuit, where they can net tens of thousands of dollars in additional income.

Critics of the practice say delivering talks for drug companies is incompatible with teaching future generations of physicians. That’s because drug firms typically pick the topic of the lecture, train the speakers and require them to use company-provided presentation slides.

Reporters compared the names of faculty members at a dozen medical schools and teaching hospitals with a database of payments reported by seven drug companies. Lists of the physicians whose names matched were provided to the universities and hospitals for verification and comment. Because the majority of the more than 70 U.S. drug companies don’t yet report such payments, the review provides only a glimpse of possible lapses at schools. As more companies make their speaker fees public, additional faculty members probably will show up, several university officials said.

At Stanford, officials said some faculty members provided proof that they had not violated the policy because they used their own lecture materials or stopped speaking as soon as it took effect. Others conceded that they were in the wrong. Among them was Dr. Alan Yeung, vice chairman of Stanford’s department of medicine and chief of cardiovascular medicine, who was paid $53,000 from Eli Lilly & Co. since 2009. In an e-mail, Yeung said he quit speaking for the company this fall.

“I take full responsibility for this error,” he said. “Even though I felt that these activities are worthwhile educational endeavors, the perceived monetary conflict may be too great.”

Child psychiatrist Hans Steiner was paid $109,000 by Lilly to deliver talks about a drug for attention deficit hyperactivity disorder. In an e-mail, Steiner said he spoke in “very rural and other impoverished settings which only have limited access to experts like me.”

He said that he wrongly assumed Stanford’s policy didn’t apply to him once he became an emeritus professor last year, but that now, “I fully intend to comply.”

Pizzo, Stanford’s dean, said physicians who appear to have violated the policy will be referred for discipline if necessary. He compared some of the physicians’ explanations to what a cop might hear after catching a motorist running a late-night stop sign.

Several schools’ policies appear to have strong prohibitions against industry speaking, but in practice may not.

UCSF began placing restrictions on speaking in 2007 and expanded them this year. The current policy prohibits participation “in any company speakers’ bureaus in which the sponsor determines the content of presentations or in any way controls or limits what may be presented by the speaker.”

The key word is “control” – a word that appears in policies across the country, but is interpreted differently. At some schools this means that speakers need to prepare their own slides and speeches. But at UCSF and schools such as the University of Southern California, speakers can say they are in “control” if they agree with what the drug company has provided.

Dr. David Jablons, UCSF’s chief of thoracic surgery, earned $94,000 delivering speeches for Lilly. In an e-mail, he said he uses Lilly’s slides to discuss its lung cancer drug but would “unquestionably refuse” to say something he didn’t believe.

Initially, Cohen wrote in an e-mail that Jablons complied with the intent of the policy because he “uses evidence-based scientific data with which he agrees.”

Asked how that squared with UCSF’s policy, Cohen replied: “The scientific credibility and lack of commercial focus of material presented is the critical issue, not who prepares the slides.”

Pressed about whether any faculty member could be out of compliance given such an interpretation, Cohen appeared to change his stance. He said he didn’t believe that UCSF faculty should be giving paid speeches in which the companies prepared or controlled the content via slides.

“We are educating our faculty about the policy and are taking active steps to re-examine the policy language to clarify it,” he said, as well as coming up with a better plan to enforce it.

“We have to trust that institutions are enforcing their guidelines or prohibitions,” she said.

For UMass Memorial Health Care, a central Massachusetts training hospital, its own check of the database showed only one of its nearly 1,000 employed doctors had received a speaking fee – and that was for $188.

“Really the success was in educating the physicians … and getting them to buy into it,” said John Randolph, vice president and chief compliance officer, of the hospital’s 2008 speaking ban.

But Randolph said the success is not yet complete. The policy at UMass, as at many other institutions, covers only employed faculty, not community doctors who have privileges at their hospitals or physicians who serve as volunteer teachers.

Just this year, Stanford expanded its policy to include community physicians after finding that some were making significant sums speaking for drug companies using their Stanford titles. Randolph said he hopes to keep such physicians from trading on the UMass name. He can’t stop them from speaking, he said, but he doesn’t want them mentioning his school when they do.

“That’s our next step,” Randolph said. “We’ll get there.”

Dollars for Docs is an ongoing investigation into the influence of drug company marketing payments on medical providers. To search for a doctor in the database, go to projects.propublica.org/docdollars.

ProPublica is an independent, nonprofit newsroom dedicated to investigative journalism in the public interest.