“…Agents Armstrong and Allen on several occasions talked about different individuals that they believed might be susceptible to rumors about their sexual orientation, so that they could be persuaded to become informants through the threat of such rumors being started. …” 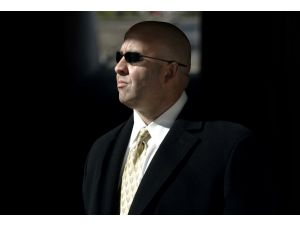 The class claims the agents had their snitch provide illegal drugs to Muslims and snoop on their sex lives, and that the fruitless “dragnet investigation” did not end until “members of the Muslim communities of Southern California reported the informant to the police because of his violent rhetoric, and ultimately obtained a restraining order against him.”

Represented by the ACLU and Council on American-Islam Relations, the three named plaintiffs say the FBI’s agent provocateur’s “violent rhetoric” about “jihad and armed conflict” disrupted their religious practice.

The class claims the FBI has been profiling Muslim communities since Sept. 11, 2001, and requested interviews with hundreds of Muslims, “often by sending FBI agents to appear unannounced” to their homes or workplaces, to question them about religious practices.

This despite the fact that in 2006, the FBI’s Assistant Director for the Los Angeles area, Stephen Tidwell, assured a Muslim group that the FBI would never send an undercover informant to spy on believers.

But in July 2006, FBI agents Kevin Armstrong and Paul Allen directed undercover informant Craig Monteilh to infiltrate the mosques in Southern California and paid him $6,000 to $11,000 per month to create video and audio recordings of Muslim activities, the plaintiffs claim. They add that Monteilh was provided with “sophisticated audio and video recording devices.”

Monteilh then publicly declared his Muslim faith during a prayer in front of hundreds of members of the Islamic Center of Irvine (ICOI), and immersed himself in the religion, the class says.

Monteilh went to 10 mosques in the area to interact with followers, and attended up to four mosques in one day. Armstrong and Allen ordered him to “gather as much information on as many people in the Muslim community as possible,” the class claims.

Armstrong and Allen told Monteilh “that they could get in a lot of trouble if people found out what surveillance they had in the mosques, which Monteilh understood to mean that they did not have warrants,” the complaint states. It continues: “Nonetheless, Agent Armstrong told Monteilh that the FBI had every mosque in the area under surveillance – including both the ones he went to and the ones he didn’t.”

Halfway through the 75-page complaint, the class claims: “Agents Armstrong and Allen were well aware that many of the surveillance tools that they had given Monteilh were being used illegally. Agent Armstrong once told Monteilh that while warrants were needed to conduct most surveillance for criminal investigations, ‘National security is different. Kevin is God.’

“Apart from the electronic surveillance program, Agents Armstrong and Allen also directed their surveillance at people on the basis of their religion by instructing Monteilh to look for and identify to them people with certain religious backgrounds or traits, such as anyone who studied fiqh (a strand of Islamic law concerning morals and etiquette), who was an imam or sheikh; who went on Hajj; who played a leadership role at a mosque or in the Muslim community; who expressed sympathies to mujahideen; who was a ‘white’ Muslim; or who went to an Islamic school overseas.”

They also told Monteilh to look particularly for people who attracted younger Muslims, and to discuss extreme Islamic attitudes and leaders to observe people’s reactions, the class claims.

Monteilh was ordered to work under cover as a “fitness consultant,” and, following orders, he “worked out with Muslims in various gyms around the Orange County area and elicited a wide variety of information, including travel plans, political and religious views,” the class claims.

He collected names, phone numbers, email addresses and license plate numbers of mosque members and turned them over to his handlers, the class says.

The agents sought to collect incriminating information about certain Muslims – “such as immigration issues, sexual activity, business problems, or crimes like drug use. Agents Armstrong and Allen instructed Monteilh to pay attention to people’s problems, to talk about and record them, including marital problems, business problems, and petty criminal issues. Agents Armstrong and Allen on several occasions talked about different individuals that they believed might be susceptible to rumors about their sexual orientation, so that they could be persuaded to become informants through the threat of such rumors being started,” the complaint states.

The agents told Monteilh that “everybody knows somebody,” and then “explained” what that meant: “They explained that if someone is from Afghanistan, that meant that they would likely have some distant member of their family or acquaintance who has some connection with the Taliban. If they are from Lebanon, it might be Hezbollah; if they are from Palestine, it might be Hamas. By finding out what connections they might have to these terrorist groups, no matter how distant, they could threaten the individuals and pressure them to provide information, or could justify additional surveillance.

In early 2007, the agents told Monteilh “to start asking more pointedly about jihad and armed conflict, then to more openly suggest his own willingness to engage in violence,” according to the complaint. “Pursuant to these instructions, in one-on-one conversations, Monteilh began asking people about violent jihad, expressing frustration over the oppression of Muslims around the world, pressing them for their views, and implying that he might be willing or able to take action.

“In about May 2007, on instructions from his handlers, Monteilh told a number of individuals that he believed it was his duty as a Muslim to take violence actions, and that he had access to weapons. Many members of the Muslim community at ICOI then reported these statements to community leaders, including Hussam Ayloush. Ayloush both called the FBI to report the statements and instructed the individuals who had heard the statements to report them to the Irvine Police Department, which they did.

Monteilh’s identity was eventually revealed, “first in court documents where the FBI and local law enforcement revealed his role, and then through his own statements which were reported widely in the press,” the class claims.

Monteilh sued the FBI for $10 million in January 2010. As Courthouse News reported at the time, Monteilh claims he “was arrested in December 2007 and ‘forced under the color of authority by the FBI and its agents, to plead guilty to grand theft, suffer a felony conviction, and endure sixteen months in prison for work performed at the direction of the FBI.'” He also claimed that he was endangered by being placed in the general population in prison after it was revealed that he was an FBI snitch.

In the new class action, named plaintiff Sheikh Yassir Fazaga, an imam with the Orange County Islamic Foundation, says that he can no longer counsel congregants at the mosque because they fear surveillance.

Fazaga claims that since having contact with Monteilh, he “has also been subjected to secondary screening and searches upon return to the U.S. from various international trips, being held up between 45 minutes and three hours most times he travels.”

The complaint states: “By targeting Muslims in the Orange County and Los Angeles areas for surveillance because of their religion and religious practice, the FBI’s operation not only undermined the trust between law enforcement and the Southern California Muslim communities, it also violated the Constitution’s fundamental guarantee of government neutrality towards all religions.”

It adds that the 14-month “dragnet investigation did not result in even a single conviction related to counterterrorism.”

“Approximately 500,000 Muslims live in Southern California, more than 120,000 of them in Orange County, making the area home to the second-largest population of Muslims in the United States,” the complaint states.

The class demands damages from the FBI, its Director Robert Mueller, Assistant Director Steven Martinez, Agents Armstrong and Allen and three other agents, for violations the First, Fourth and Fifth Amendments, the Privacy Act, the Religious Freedom Restoration Act and the Foreign Intelligence Surveillance Act.

The class also wants destruction of the information the FBI obtained illegally.

Its lead counsel is Peter Bibring with the ACLU of Southern California.