SourceWatch has Revised the History of the CIA's Operation Mockingbird

"I have deleted the content of the page for a couple of reasons: there are numerous websites, mostly conspiracy sites, that refer to Operation Mockingbird but none cite the primary source or the name or where it was first disclosed ... "

The SourceWatch editor apparently neglected to look for the primary source, or he'd have found it easily enough. The first reporter to write about Operation Mockingbird - CIA control of the media - by name was Ms. Deborah Davis, in a biography of Washington Post editor Katharine Graham - a Presidential Medal of Freedom recipient - Katharine the Great (1987) - a book that was printed, bound ... and all copies subsequently DESTROYED by the publisher - at CIA request. The book has since been reprinted.

I was the writer who brought it to the public's attention, in a chapter of Virtual Government: CIA Mind Control Operations in America (1997; the cold war initiative was conceived by Allen Dulles as a mind control program) posted on the Net as a public service by myself, and widely distributed on the Net.

No one has ever accused Deborah Davis of being anything less than credible, to my knowledge. The book is not of the "conspiracy" genre - but the information in the book about the CIA's grip on the media has been suppressed, the books burned, and Graham has an unjustified sterling reputation in the press, when in fact she was a CIA-fascist collaborator, like many others in the media-at-large. 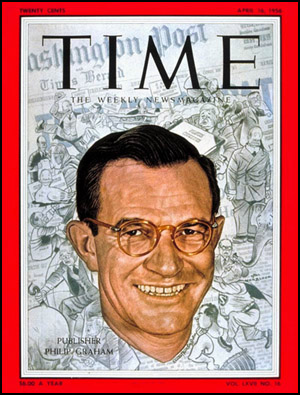 Before he shot himself, he spent his days downing impressive volumes of alcohol, burbling that the CIA was trying to kill him.

Phillp Graham oversaw Operation Mockingbird. He was institutionalized in the end at Chestnut Lodge, a CIA mind control psychiatric facility. He was released on a Thanksgiving day to be with his family, and took that opportunity to blow his head off.

If this hard-working editor - who harshly censors the work of others without bothering to look up citations - had referred to Katharine the Great, the source cited in my article, he would have found that Davis drew from FEDERAL DOCUMENTS and CORRESPONDENCE between the Agency and editors of the Post in her book on Ms. Graham and Mockingbird - and then he wouldn't feel compelled to revise history for silly reasons.

Another justification SourceWatch gives for deleting any reference to Mockingbird is that information on the state propaganda program is found at "mostly conspiracy sites." For obvious reasons, the Washington Post and NY Times have no articles on CIA infiltration of the media to satisfy the editor at SourceWatch.

The following "conspiracy sites," among others, have posted articles on Mockingbird ...

And if one opens one's eyes and perceives, one can actually watch Mockingbird in operation - WHY THE HELL ELSE ARE WE IN IRAQ?

Marginal, media-trained thinkers are constantly calling me names, casting aspersions on my character - in defense of a corrupt and insane establishment - and getting everything wrong in the process of trashing research that I know to be accurate.