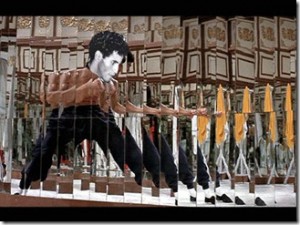 I taped this from TV here in the Los Angeles area back in June, 1985. I am pretty sure it was June of 1985. The tape features Kent Shocknek at first as the "in studio" newscaster initially introducing Doug Bruckner with his story on Sirhan; then the next hour, the father of George Clooney (Nick Clooney) who worked as a newscaster in 1985, is one of the "in studio" newscasters with Kelly Lange. Nick Clooney is the white haired man in the beige suit in the studio. They are introducing- or rather passing the story to Doug Bruckner, who interviewed Sirhan Sirhan at the Soledad prison. If I recall correctly, there were 3 hours of the local news programs each at 4/5/6 PM, back in 1985, and each hour they had a little more of the Sirhan interview. So that is why the newscasters in the studio switch off and change- since each hour there are different newscasters.