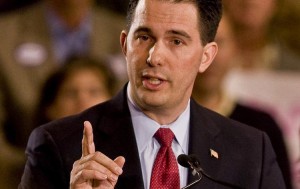 Buses paid for by the Koch-funded Americans for Prosperity (AFP), as part of its "Better Wisconsin" tour, and the Tea Party Express, with its "Reclaiming America" bus tour, converged in Madison, Wisconsin, Friday evening.

Both groups, which do not dislose who is bankrolling their operations, are touring Wisconsin on the eve of the election to rally voters to back controversial Wisconsin Governor Scott Walker and his allies facing recall. AFP, a non-profit under the tax code and not a registered PAC, has claimed its bus tour has nothing to do with the pending recall election; the Center for Media and Democracy has asked AFP to reveal who is funding its campaign, and the director of its state operations has refused. The Tea Party Express has also previously indicated that as a non-profit group under section 501(c)(4) of the tax code it need not disclose its funders.  ...

The speakers at Friday's event near the state's Capitol railed against the progressive movement ,,, " These people are domestic enemies of the Constitution." ...

Right-wing talk show host, Vicki McKenna, another frequent Tea Party speaker, claimed a typical liberal is someone who "gets up at 10" because "they are a professional protestor." McKenna also defended Beloit billionaire Diane Hendricks as a woman who pays "hundreds of millions of dollars" in taxes despite the fact that her 2010 tax records showed she payed almost nothing to the state of Wisconsin--and she recently gave $500,000 to Walker's efforts to remain governor of the state.

Lloyd Marcus, another regular speaker at Tea Party events, took the stage to sing a song about the end of "this socialist nightmare." He introduced himself by declaring "I am not an African American. I am Lloyd Marcus. . . American," producing a photo ID.  He taunted opponents of ALEC backed bills to make it harder for Americans to vote through restrictive ID requirements, by saying "Look! Black people can have a photo ID!" (The Wisconsin voting restrictions pushed into law by Walker have been stayed by a federal court as unconstitutional.) ...