Democrats’ move to increase the maximum fine for oil spills to $10 billion is foiled by Sen. James M. Inhofe. 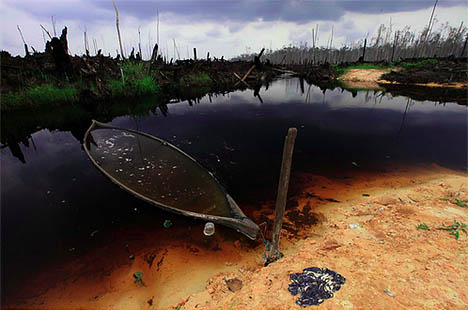 President Obama denounced Republicans on Tuesday for “playing special-interest politics” after a GOP senator thwarted a Democratic effort to raise the liability cap for oil spills to $10 billion.

Sen. Robert Menendez (D-N.J.) was seeking the unanimous consent of the Senate to move forward on the Big Oil Bailout Prevention Act, which would retroactively boost the legal cap of $75 million on how much companies must pay for economic damages.

But Sen. James M. Inhofe (R-Okla.) blocked the effort, saying it would make drilling too expensive for smaller companies. “Big Oil would love to have these caps there so they can shut out all the independents,” he said, echoing the argument of Sen. Lisa Murkowski (R-Alaska), who halted an identical move last week. …

BP has pledged to pay all “legitimate” claims of economic damage despite the current cap of $75 million. But Democratic lawmakers want to see a $10-billion cap set into law, just in case BP resists paying what is expected to be billions of dollars in claims.

The April 20 BP blowout is expected to cause billions of dollars in damage to fisheries and tourism, which would be covered by the bill.

The administration has not specified by what amount it wants to raise the cap. But the move to block the liability bill drew a sharp rebuke from Obama.

“This maneuver threatens to leave taxpayers, rather than the oil companies, on the hook for future disasters like the BP oil spill,” he said. “I urge the Senate Republicans to stop playing special-interest politics … and demand accountability from the oil companies.”

Alarm grew in Florida as about 20 tar balls of unknown origin swept up in the Keys. Officials are testing the tar balls to determine whether they came from the spill. The Louisiana Department of Environmental Quality has photographed oil reaching the shore of southern Plaquemines Parish in the Mississippi River Delta.

Jane Lubchenco, head of the National Oceanic and Atmospheric Administration, told the Senate commerce committee that the oil slick could be swept up into the Loop Current, which curls around the Florida Peninsula. But by the time it reaches the Florida Straits, possibly in eight to 12 days, “It would likely be significantly weathered and degraded as well as diluted,” she said.

Simon reported from Washington and Roosevelt from Los Angeles.