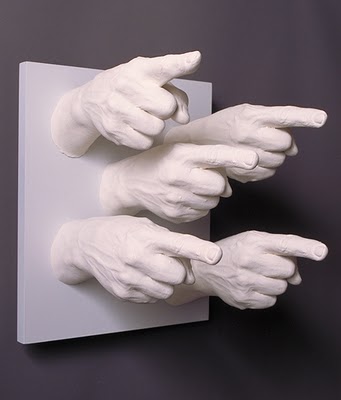 Republicans are, to be Biblicly honest, brain-damaged Good Germans. This status, if they are to retain it, demands a peculiar manner of perceiving the world – one that allows them to skirt responsibility for any offense this side of # (the one charge that GOP card holders are unable to glibly deflect, and they struggle with this one frequently).

Deflection is a Republican’s primary tool for derailing the trauma of self-confrontation and the facing of reality. Example: “If Bush committed a crime in office, I forgive him, because Bill Clinton did, too.” Fox News and other fascist media sources have programmed GOP Good Germans to deflect. The technique is a useful tool for assuaging troublesome pangs of conscience, and frequently even silences critics of fascism – disarms their arguments with a wave of confusing irrelevance.

Another example – I give you:

“It’s time once again for ‘Democrats or Not,’ where we read an MSM story about corruption in politics and try to determine which party the perp is from… because the MSM won’t tell us — usually, that is…. [T] his time we don’t have to guess which party the violator in question is from. Amazingly, unexpectedly, we have finally found a story where the AP has found the temerity to list the perp’s party affiliation. And we can thank the AP for their bravery in, ‘Judge Grills E-Mail-Deleting Texas DA.'”

The AP routinely notes the political affiliation of a politician charged with a violation of law. It’s no big deal.

Huston is actually arguing that the “liberal” media censor the affiliation if the culprit happens to be a Democrat, a ridiculous accusation based on dysfunctional reasoning.

“An embattled prosecutor (District Attorney Chuck Rosenthal) facing a contempt charge for deleting e-mails was grilled Friday by a federal judge who said he should have known better than to erase material he had been ordered to turn over.”

Rosenthal’s a Republican, all right. You sort of glean that from the story immediately …

“An outrage, I tell you. So, what party does this dastardly, low down, sidewindin’, fourflusher belong to? Which party has the AP valiantly blown the whistle on? (my emphasis)

“‘Since the e-mails were made public, the Republican district attorney has been forced to abort his re-election bid and has faced almost daily calls to resign, including from hundreds of protesters who crowded the courtroom Thursday after marching from his office to federal court.’

This is not even a major point – is the author suggesting that the newswire consciously suppresses this information?

Unreasoning paranoia, thy name is Republican.

“But now we can rejoice. The AP has grown a pair and exposed this rotten Republican.”

It’s okay, this bizarre argument goes – the press doesn’t ID Dems (to protect their reputations), so if a Republican official destroys evidence in an important judicial proceeding, why be concerned?

“But, gosh. Isn’t it just a teeny, weeny bit odd that we have seen so many dozens of stories where they accidentally forget to mention their perp is a Democrat, but now that they have finally found the stones to list a party, it just happens to be a Republican?

Yes, that’s putting it mildly. The author is struggling with REDD, a mental disease common to all Republican Good Germans, without exception, and fails to comprehend that his focus should be on the deleted e-mails, not on a bit of trifling Monday-morning editing that somehow – by some occult process of faith – exonerates a political criminal with Good German affiliations … like Mr. Huston himself, who needs to turn off that cable and seek psychiatric help (unless there is a mad Democrat lurking out there, in which case it’s politically correct if Huston is suffering from REDD with its conservatively “principled” host of pathologies).