"... While my battle may be quixotic, it is one that has to be fought if we are to have any hope of pulling this country back from corporate fascism. ..." 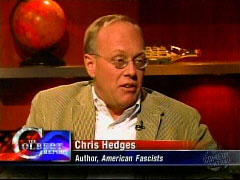 MANHATTAN (CN) - Reporter Chris Hedges sued President Obama in a federal class action, claiming the 2012 National Defense Authorization Act aka the "Homeland Battlefield Bill" threatens him and other journalists with life imprisonment without charge or trial for doing their job. President Obama signed the bill on New Year's Eve. It authorizes the military to indefinitely detain anyone it accuses of planning or supporting terrorists or "associated forces," anywhere in the world, without charge or trial.

Co-sponsor Sen. Carl Levin, D-Mich., said during congressional hearings that Obama asked him to preserve language in the bill making Americans subject to indefinite detention. In his signing statement, however, Obama claimed that he would not use that power against U.S. citizens - though the bill authorized it.

"I have signed this bill despite having serious reservations with certain provisions that regulate the detention, interrogation, and prosecution of suspected terrorists," Obama wrote. He added later: "I want to clarify that my administration will not authorize the indefinite military detention without trial of American citizens. Indeed, I believe that doing so would break with our most important traditions and values as a nation."

That nonbinding promise did not satisfy Hedges, who said the law puts him at risk of indefinite detention.

"Plaintiff Christopher Hedges is a journalist whose profession requires, in part: 1) that he have communication with and personal and direct intercourse with persons who are likely to be deemed engaged in hostilities with the United States under the AUMF [Authorization for Use of Military Force, Public Law 107-40] and the Homeland Battlefield Bill; 2) that he travel to see and meet with such persons; 3) that he report on the activities and beliefs of such persons; and 4) through his journalistic endeavors to convey their philosophy and belief systems to the public at large."

"As a journalist, essayist, author and war correspondent, plaintiff publishes and conveys the opinions, programs and ideas of 'al-Qaeda, the Taliban, or associated forces that are engaged in hostilities against the United States or its coalition partners, ...', Homeland Battlefield Bill, §1031(b)(2), such journalistic activity being brought within the scope of the statute's provision defining a 'covered person' as one who has 'substantially supported' or 'directly supported' the acts and activities of such individuals or their organizations, allies or associated forces." (Ellipsis in complaint.)

Hedges cites a Jan. 31, 2011 article he wrote for Truthdig.com, which he says could cause the U.S. government to accuse him of being a terrorist.

"The secular Arab regimes from Morocco to Yemen, for all their ties with the West, have not provided freedom, dignity, opportunity or prosperity for their people. They have failed as spectacularly as the secular Palestinian resistance movement led by Yasser Arafat. And Arabs, frustrated and enduring mounting poverty, are ready for something new. Radical Islamist groups such as the Palestinian Hamas, the Shiite Hezbollah in Lebanon and the jihadists fighting in Iraq and Afghanistan are the new heroes, especially for the young who make up most of the Arab world. And many of those who admire these radicals are not observant Muslims. They support the Islamists because they fight back."

Hedges says he "has and expects to again publish other writings of similar nature," and that under the Homeland Battlefield Bill, such articles could earn him a one-way ticket to Guantanamo or other extrajudicial prisons.

"This complaint is not an acknowledgment or admission as a matter of law or fact that plaintiff is a 'covered person' or is otherwise within the scope of the Homeland Battlefield Bill, but the complaint asserts that the Homeland Battlefield Bill is sufficiently broad or overbroad as to cause plaintiff and similarly situated persons to be in foreseeable jeopardy of being brought within its textual provisions," the complaint states.

Hedges explained his self-described "quixotic" legal battle in a new article for TruthDig.com: "Why I am Suing Barack Obama."

"I spent many years in countries where the military had the power to arrest and detain citizens without charge," Hedges wrote in the article published Monday. "I have been in some of these jails. I have friends and colleagues who have 'disappeared' into military gulags. I know the consequences of granting sweeping and unrestricted policing power to the armed forces of any nation. And while my battle may be quixotic, it is one that has to be fought if we are to have any hope of pulling this country back from corporate fascism."

Later in the article, Hedges wrote:

"This demented 'war on terror' is as undefined and vague as such a conflict is in any totalitarian state. Dissent is increasingly equated in this country with treason. Enemies supposedly lurk in every organization that does not chant the patriotic mantras provided to it by the state. And this bill feeds a mounting state paranoia. It expands our permanent war to every spot on the globe. It erases fundamental constitutional liberties. It means we can no longer use the word 'democracy' to describe our political system. The supine and gutless Democratic Party, which would have feigned outrage if George W. Bush had put this into law, appears willing, once again, to grant Obama a pass. But I won't. What he has done is unforgivable, unconstitutional and exceedingly dangerous."

The law will take effect on March 3, according to the complaint.

Hedges also sued Secretary of Defense Leon Panetta, who reportedly opposed the bill. Hedges asks that the law to be declared void for violating of the 1st and 5th Amendments, and constitutional rights on access to civilian courts.

The case has been assigned to U.S. District Judge Katherine B. Forrest, who was named one of "America's Leading Lawyers for Business" by Chambers U.S.A. before President Obama appointed her to the bench in 2011.

Obama is a liar…the man know full well it was unnecessary to have this in the bill…he lies…he is a fascist in ever sense of the word..he is the new bread of them that use a stealthy polite approach to fool you into trusting him…he can only be a sociopath..because they are the only ones with no remorse for what suffering they cause… be prepared for far worse in the future….the Zionist controlling him will enslave us all.