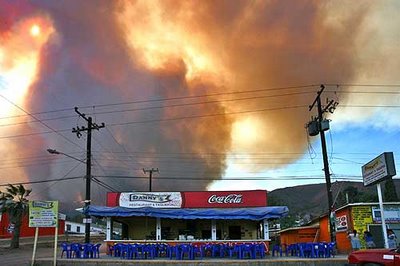 LOS ANGELES and SAN BERNARDINO (CBS) ― A U.S. Forest Service arson investigator, who is currently in jail for allegedly threatening public officials, was also viewed as a possible “firefighter arsonist” for dozens of suspicious blazes in Riverside, San Bernardino and Los Angeles counties, it was reported Saturday.

Court records show that a rash of arsons that hit the mountains north of Santa Clarita ended when a federal arson investigator was transferred out of the area, and that arson investigator is now in jail on charges he threatened California Sen. Barbara Boxer and Rep. Mary Bono Mack, the Riverside Press-Enterprise reported Saturday.

Michael Karl McNeil, 35, has also been linked to a string of arsons that cropped up near Beaumont after he was transferred there.

A U.S. Forest Service special agent’s report on McNeil is being used as evidence by an attorney defending another man on murder and arson charges from the 2006 Esperanza fire, that killed five firefighters near Idyllwild. Raymond Lee Oyler, 35, could get the death penalty.

The attorney told the newspaper that the string of arsons now being linked to the disgraced federal arson investigator casts doubt on the case against Oyler.

The secret report, written by a Forest Service special agent, says an unprecedented rash of 37 arsons broke out when McNeil was assigned to the Saugus Ranger District at Oak Flat Station in the Angeles National Forest in 2001.

“While McNeil was a firefighter … McNeil lived in Palmdale and the 37 arson fires occurred along various routes between Oak Flat Station and Palmdale,” the report states. “After McNeil left the Saugus Ranger District (in 2003 and 2004), no arson fires occurred,” according to the report, as quoted by the Press-Enterprise.

Local firefighters suspected the federal arson investigator had actually set the blazes, but could not prove it, the report said.

The confidential report portrays a man with a checkered past whose claims to be an arson investigator and firefighter were doubted by professionals around him, according to the Press-Enterprise.

McNeil started as a volunteer firefighter in Utah in 1996 and was later fired, according to the report. On three or four occasions, he reported wildland fires, was first on the scene, and found an arson device, and after the last such incident he was confronted, questioned and dismissed, according to the Press-Enterprise.

From June 2005 to July 2007 McNeil worked as a fire prevention technician for the San Bernardino National Forest in the San Jacinto Ranger District, assigned to the Banning Pass Fire Station, according to the report.

The number of arsons in that area jumped after McNeil arrived.

During his assignment there, Forest Service officials became suspicious of McNeil’s background, his claims of experience as an arson investigator, and the coincidence of his arrival and the increase of arson fires, according to the Press-Enterprise.

The newspaper reported that a CalFire enforcement officer had spotted McNeil stopped in his official car, near an arson-set fire, as firefighters rushed to a blaze in Whitewater Canyon in Palm Springs. Other officers reported that McNeil often was the first person to arrive at arsons, often beating the nearest fire trucks to the crimes.

McNeil was being held on a 36-count arson and terrorist threat complaint on $2.88 million bail at the Twin Towers Correctional Facility. His next next court date is Dec. 4 at the Alhambra Courthouse, 150 W. Commonwealth Ave., Alhambra. There is also a hold for McNeil from Lassen County in Northern California, according to sheriff’s records.