" ... He called student dissenters 'basically parasitic' and said, 'They have never done a productive thing in their lives. They take their tactics from Fidel Castro.' ... ” 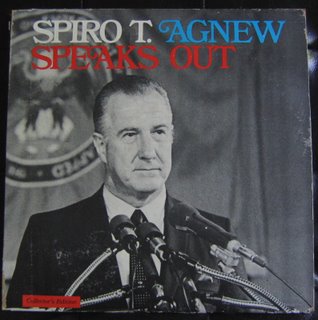 Spiro Agnew, the disgraced media-bashing vice president under Richard Nixon, experienced one of the fastest rises in American politics. But meteoric bursts often scatter to the earth. In Agnew's case, it was to Rancho Mirage.

His career was in the classic American mold. His father came to the United States from Greece in 1896 and ran a restaurant in Baltimore. His American mother was from Virginia.

Agnew was born in 1918 and studied chemistry at Johns Hopkins University for three years. He married his wife, Judy, in 1942. A move to the University of Baltimore was interrupted by World War II, during which he earned a Bronze Star for service in France and Germany. He returned to earn his law degree, pass the bar exam and start his political career on a local level as president of the P.T.A. in his suburban Baltimore community.

He was elected Baltimore County executive in 1962 and left a record of improved schools and a strengthened police bureau.

Agnew easily won the governor's seat in 1966 and in two short years enacted the largest tax increase in Maryland's history, repeal of the state's 306-year-old anti-miscegenation law, a graduated income tax and one of the nation's toughest state antipollution laws.

He admitted, “the name of Spiro Agnew is not a household word” when Nixon picked him to be his vice presidential running mate in the 1968 presidential election. But his hard-line statements soon changed that. He called student dissenters “basically parasitic” and said, “They have never done a productive thing in their lives. They take their tactics from Fidel Castro and their money from Daddy.”

As Maryland governor and Nixon's running mate, he made what was probably his first visit to the Coachella Valley. He represented the president-elect at the Dec. 3, 1968, Republican governors' conference in Palm Springs.

After the election, his rhetoric grew even harsher:

He called leaders of the Vietnam war protest movement “an effete corps of impudent snobs.” Television and radio reporters were “the most superficial thinkers I've ever seen” or “nattering nabobs of negativism.”

He became Nixon's point man, proclaiming himself the spokesman for “the silent majority.”

Although he was a likely candidate for the presidential nomination in 1976, Agnew's political career came to a crashing halt in October 1973. He resigned after he was accused of taking bribes from construction companies while serving as Maryland governor. He pleaded no contest to charges of evading taxes on the bribes and paid a $10,000 fine.

His plea was part of a bargain that allowed him to avoid indictment on extortion charges. He was the second vice president to resign in office and the first to be forced out by legal troubles.

By then, the Agnews had visited the Coachella Valley numerous times and had become friends with Bob Hope and Frank Sinatra. After he resigned, he and Judy moved to a winter home at the Springs Country Club in Rancho Mirage. They avoided publicity and lived a quiet, reserved country-club style life. He played tennis and golf. Neighbors recall seeing him bicycle around Rancho Mirage, dine at local restaurants and party, often at the Sinatra compound.

He ran a successful consulting service for businesses working in the Middle East and wrote a novel, “The Canfield Decision.” His autobiography, “Go Quietly Or Else,” published in 1980, declared his innocence in the bribery accusations.

The former vice president made his first local public appearance in more than two years in January 1982 to deliver the eulogy at St. Louis Catholic Church in Cathedral City for tenor saxophone player Vido Musso. Musso was a roommate of Sinatra when the two performed in the Harry James Band from 1940 to 1941.

Agnew died in September 1996 of undiagnosed leukemia at age 77 at his summer home in Maryland. He was buried beneath an oak tree in a cemetery in Timonium, Md.