Protesters try to Dissuade Syracuse U. Students from Joining the CIA - The Constantine Report
0 SHARES

American Terrorism » Protesters try to Dissuade Syracuse U. Students from Joining the CIA

Protesters try to Dissuade Syracuse U. Students from Joining the CIA

" ... The CIA endorses torture, assassination, terrorism and political subversion, none of which should be promoted as a legitimate career path. ... " 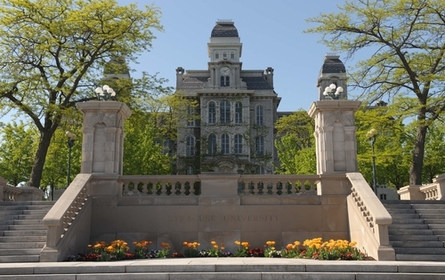 Syracuse, N.Y. — Four protesters — two from the Syracuse Peace Council and two Syracuse University graduate students — gathered outside an SU classroom that was being used Thursday to recruit students to join the CIA.

About 30 to 40 students attended the recruiting session in room 347 of Hinds Hall, estimated Jessica Azulay, staff organizer for the peace council.

“(The protest) didn’t need to be very big,” she said. “Our stance is, if you’re going to work for a place, you should have a fundamental knowledge of what the organization stands for.”

In this case, she said, the CIA endorses torture, assassination, terrorism and political subversion, none of which should be promoted as a legitimate career path. One of the protesters, grad student Brian Tackett, knelt on the ground while dressed in an orange jumpsuit with a hood over his head, she said.

Another, grad student Ben Kuebrich, went inside the classroom and tried to talk to the students and recruiters. Kuebrich said he stayed for most of the 90-minute session. Four CIA officials were there, and Kuebrich said he asked several questions about torture allegations against the agency.

"None of them really wanted to respond," Kuebrich said. "I just tried to be respectful and ask questions."

He said none of the students seemed to mind that he was there asking questions.

The protesters passed out fliers detailing what they described as the CIA’s history of overthrowing democratically elected governments and supplying weapons to repressive regimes, Azulay said.

According to the SU website, the CIA was on campus recruiting for 12 job openings.