" ... He was mired in legal trouble during the early 1990s when a Japanese business he was connected to was accused of being part of an international crime ring. ... " 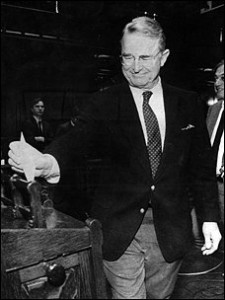 Prescott S. Bush Jr., 87, a retired insurance executive who was the older brother of one U.S. president and an uncle of another, died June 23 at his home in Hingham, Mass. The death was confirmed by his son James, but no cause was given.

Mr. Bush was a partner in the New York insurance brokerage firm Johnson & Higgins for more than 30 years before founding a nonprofit group that promoted investment and trade with China.

His father, Prescott Sheldon Bush, served as a U.S. senator from Connecticut from 1952 to 1963. His younger brother George H.W. Bush was elected president in 1988 after serving two terms as Ronald Reagan's vice president.

A longtime behind-the-scenes volunteer for the Republican Party, Mr. Bush made only one attempt at elective office. In 1982, he decided to run for the U.S. Senate against Connecticut's two-term Republican incumbent, Lowell P. Weicker Jr. Mr. Bush capitalized on his younger brother's popularity as vice president and early in the campaign was the favorite in a poll among likely Republican voters.

But days after winning enough delegates at the statewide convention in July to force Weicker into a primary, Mr. Bush suddenly withdrew from the race after conceding that he would probably lose to the Democratic candidate in November, even if he beat Weicker in the September primary.

In 1984, Mr. Bush retired from the insurance business and started his international consulting group.

He was mired in legal trouble during the early 1990s when a Japanese business he was connected to was accused of being part of an international crime ring.

Many other endeavors in Asia proved to be quite successful. In 1990, Mr. Bush helped establish the Shanghai Country Club, which features a Robert Trent Jones Jr.-designed golf course that is considered among the best in China.

Prescott Sheldon Bush Jr. was born Aug. 10, 1922, in Portland, Maine. One family story has it that his mother, Dorothy Walker Bush, was rounding the bases on a home run during a softball game in Kennebunkport, Maine, when she went into labor with the first of her five children, Prescott Jr. At the same time, Mr. Bush's father, who was later head of the United States Golf Association, was on the links.

Mr. Bush grew up in Greenwich, Conn., and shared a room with his brother George. One day, their mother decided to give the boys separate rooms.

Not long after, she asked her sons what they wanted for Christmas that year. Both independently asked to be moved back into the same room, an arrangement that lasted until Prescott Bush went off to boarding school at the Phillips Academy in Andover, Mass.

After graduating from Andover in 1940, Mr. Bush attended his father's alma mater, Yale University. He left in 1943 to work for Pan Am Airlines in Brazil, where he helped construct airports and runways.

He moved back to the United States in 1949 and worked in the Pan Am office in New York. Three years later, he joined Johnson & Higgins.

In addition to his son James Bush of Hingham and his brother, the former president, survivors include his wife of 66 years, Elizabeth Kauffman Bush of Hingham; a daughter, Kelsey Bush-Nadeau of Williston, Vt.; two brothers; a sister; and six grandchildren.

Mr. Bush's family said some of his favorite times at Yale were with the Whiffenpoofs, an a cappella group that his father also sang with.

"He just absolutely loved it," his wife once said. "It was such a wonderful group. They couldn't resist singing wherever they were."