” … Numerous newspapers and magazines started writing about another scandal brewing in the United States. The key word here is ‘another.’ America has become famous for the crimes, which its servicemen committed against civilians. They slaughtered people and simply got fired for that. … “ 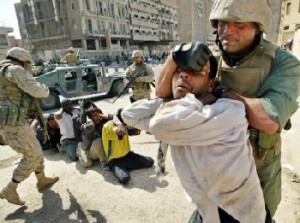 Evidence to prove the “triumph of democracy” in Iraq made numerous headlines in the world yesterday, April 19. The videos and photos clearly showed how the citizens of the world’s most democratic nation, “the empire of kindness,” spread their democracy in Iraq. A Pravda.Ru observer tried to see if there was any difference between US soldiers and fascists of Nazi Germany from 1941-1945.

It is an open secret that the USA’s main achievements in Iraq include the toppling of the totalitarian regime, the liberation of the country from Saddam Hussein’s dictatorship and the establishment of true democracy. That was one of the basic messages to the world from the 43rd President of the United States George Bush. The 44th one, Barack Obama, continued the shameless bravado of his predecessor, albeit Obama used a different tone in his statements that he made at Fort Bragg in North Carolina.

Obama made those statements in connection with the withdrawal of US troops from Iraq. The head of the White House stated that even though Iraq was far from being a perfect place, US troops were leaving the country with their “heads held high.”

“It has many challenges ahead. But we are leaving behind a sovereign, stable and self-reliant Iraq, with a representative government that was elected by its people,” the 44th President said.

The small nuances, like the never-found weapons of mass destruction and the civil war that has been eating the whole country alive non-stop for years, the unexampled surge of terrorism, the ethnic massacres and many other “little things of no importance” – US politicians prefer not to notice all that.

However, no one has ever canceled the regulations of the UN Charter and the resolution of the UN General Assembly that define the notion of aggression against sovereignty, territorial integrity or political independence of another state. Needless to say that no one in the States has been jailed for it.

Let’s get back to Iraqi democracy. It appears that the democracy in Iraq ends beyond the borders of Baghdad, where it turns into absolute anarchy. Here is how democracy looks in the center of the Iraqi capital. A Humvee packed with Blackwater hirelings is rushing across the streets of Baghdad ignoring all traffic rules possible. The Humvee runs into other small cars and then crashes into the side of a car driven by an Iraqi national at a crossing.

Another video shows another Humvee driving through the streets of Baghdad. The US soldiers in the vehicle simply fire their guns at other cars and trucks that stand in their way.

US soldiers have made many of such videos to keep them for memory of their “democratic” service in the war-torn country. When home, they will be delighted to show those videos to their pals and tell them how exciting it was to travel across the wild country and shoot those demented Iraqis just for fun.

One may recall pictures of Nazi soldiers pointing their guns at women and children during the executions of civil population. Nazi soldiers would take those pictures and then keep them in their wallets for memory. Nowadays, they make videos instead of pictures, but the point of this act remains the same.

The above-mentioned videos were exposed by Harper’s Magazine. The events depicted in the videos took place in 2006. One may assume that there are too many of such other videos and photographs in the United States.

Numerous newspapers and magazines started writing about another scandal brewing in the United States. The key word here is “another.” America has become famous for the crimes, which its servicemen committed against civilians. They slaughtered people and simply got fired for that.

Nazi soldiers committed incredible atrocities in the USSR because the Fuhrer ordered to release German soldiers from responsibility for their crimes committed on the Soviet land.

Prosecution of offenses against civilians by members of the Wehrmacht was decreed to be “not required” unless necessary for the maintenance of discipline.

–  “The partisans are to be ruthlessly eliminated in battle or during attempts to escape,” and all attacks by the civilian population against Wehrmacht soldiers are to be “suppressed by the army on the spot by using extreme measures, till [the] annihilation of the attackers;

–  Every officer in the German occupation in the East of the future will be entitled to perform execution(s) without trial, without any formalities, on any person suspected of having a hostile attitude towards the Germans”, (the same applied to prisoners of war);

–  “If you have not managed to identify and punish the perpetrators of anti-German acts, you are allowed to apply the principle of collective responsibility. ‘Collective measures’ against residents of the area where the attack occurred can then be applied after approval by the battalion commander or higher level of command”;

–  German soldiers who commit crimes against humanity, the USSR and prisoners of war are to be exempted from criminal responsibility, even if they commit acts punishable according to German law.

Doesn’t it seem that one may find a similar order in the archives of the Pentagon?

Previous Article
ALEC Reaches Out To Right-Wing Bloggers For PR Help
Next Article
Independent and Principled? Behind the Cato Myth