Pope ignores church’s own bloody past 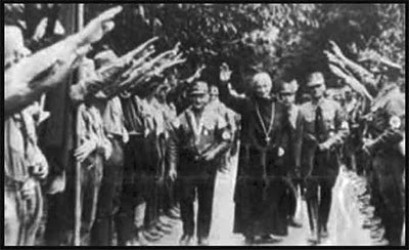 The Pocono Record reports of the Pope’s publication of a 76-page encyclical in which he blames atheists and modern (Protestant) Christians for the “greatest forms of cruelty and violations of justice ever known.”

The encyclical cites, among others, the French Revolution, Karl Marx, and the subsequent failings of 20th Century Communism.

These were, indeed, protracted and bloody social events. Many people in those times were attempting to emerge from the Dark Ages by any means possible.

The encyclical, however, neglects to mention “The Inquisitions” or the tacit support of Germany’s National Socialist Party in just this past century. Indeed, these are just two of the many sustained acts of criminal injustice inflicted on humanity by the Roman Catholic Church. Can anyone deny these events and who is responsible? Are the Pope and his regime in any position to point an accusing finger?

Most atheists are not born as atheists. They adopt that philosophy, probably most of them at least, after experiencing the hypocrisy and disillusionment of organized religion.

Then you have the gall to point a finger at those “Protest-ants” who have exposed and rebelled against two thousand years of a bloody and corrupt Roman Catholic hierarchy. If the Pope can’t publish the truth, and the whole truth, then the Pope should not publish at all.

The Day Canada Declared Itself a Fascist State
Jan 23