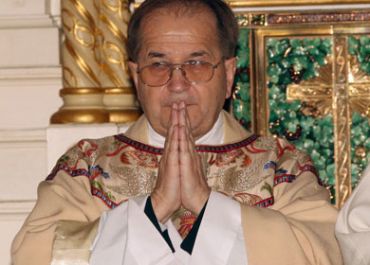 The priest, the Rev. Tadeusz Rydzyk, runs a conservative media empire that includes Radio Maryja, a station that has broadcast anti-Semitic programming in the past — leading many Rydzyk critics to believe that he did indeed make the comments that are on the tape — supposedly from a lecture made in the spring.

Rydzyk has not denied giving the speech, but his reaction has been somewhat contradictory. He suggested the tapes were doctored — but without specifying which parts of his speech might have been altered. But he has rejected accusations of anti-Semitism and said he “didn’t intend to offend anyone.”

His purported comments have sparked the outrage of Israel and Jewish groups. The Israeli ambassador called them the worst case of anti-Jewish language Poland has seen since an anti-Semitic campaign in 1968 that drove thousands of Jews to flee the country.

Prosecutors in the central city of Torun received the tapes on Tuesday from the weekly magazine Wprost. The tapes are said to be of a lecture Rydzyk gave last spring, prosecutors’ spokeswoman Ewa Janczur said.

Wprost last month published excerpts and posted audio clips on its Web site from the lecture, given to students this spring at a journalism school Rydzyk established in Torun, where Radio Maryja is headquartered.

On the tapes, the speaker purported to be Rydzyk suggests that Jews are greedy and that Polish President Lech Kaczynski is subservient to Jewish lobbyists. The speaker also appeared to criticize the first lady’s support for abortion rights, called her a “witch,” and suggested she should kill herself.

Janczur said prosecutors were examining the tapes before deciding whether to launch a criminal investigation. The decision would be announced after Aug. 20, she said.

The Vatican issued assurances Thursday that the Pope’s meeting with Rydzyk, which drew protests from worldwide Jewish organizations, did not imply any change in the church’s desire for good relations with Jews.

The Inside Story of Pakistani Schooling of Terrorists
Aug 10