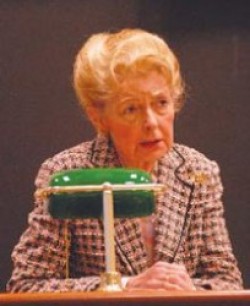 In recent weeks, Brownback has called on Tancredo to return contributions he has received from John Tanton, a controversial immigration-reform backer who also reportedly helped found an abortion-rights group.

Brownback, whose campaign centers on tax reform, family values and opposition to abortion, has sponsored recorded telephone calls to Iowa voters, in which a woman’s voice tells them, ‘Say no to Tom Tancredo and his Planned Parenthood friends.’

Tancredo has demanded an apology, saying he has a clear anti-abortion record dating back 30 years, to his days in Colorado’s state legislature. Now, he’s also being defended by Schlafly of the Eagle Forum, who gained national prominence in the 1970s by opposing the proposed Equal Rights Amendment for women.

She called an Iowa radio program on Monday to call Brownback’s charges “ugly.” She has recorded messages for Iowa voters.

“I want to go on record as saying I’ve known Tom Tancredo for 30 years and I know for sure he has always been a champion of the right to life of the unborn,” Schlafly says in the calls.

Brownback’s campaign on Monday released a statement citing Tanton’s “racist statements on minorities and population control,” and standing by its calls for Tancredo to return contributions.

“The facts are clear: Tom Tancredo says he is committed to being pro-life but has accepted thousands of dollars from the founder of a major Planned Parenthood network,” the statement said.

Schlafly said Monday on WHO Radio’s Jan Mickelson show that Brownback was being hypocritical because he had accepted contributions from SBC Communications, which is on some abortion opponents’ boycott lists.