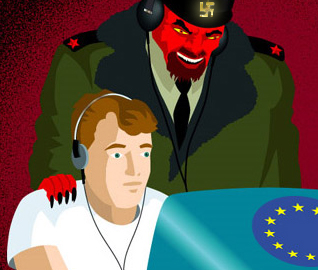 Perception management is a term originated by the US military. The US Department of Defense (DOD) gives this definition: Actions to convey and/or deny selected information and indicators to foreign audiences to influence their emotions, motives, and objective reasoning as well as to intelligence systems and leaders at all levels to influence official estimates, ultimately resulting in foreign behaviors and official actions favorable to the originator’s objectives. In various ways, perception management combines truth projection, operations security, cover and deception, and psychological operations.[1]

US Department of Defense

Deception and sleight of hand are important in gaining advantages in war, both to gain domestic support of the operations and for the military against the enemy. Although perception management is specifically defined as being limited to foreign audiences, critics of the DOD charge that it also engages in domestic perception management. An example cited is the prohibition of viewing or photographing the flag draped caskets of dead military as they are unloaded in bulk upon arrival in the U.S. for further distribution, a policy only recently implemented. The DOD also describes perception management as an intent to provoke the behavior you want out of a given individual.[citation needed] During the Cold War, the Pentagon sent undercover US journalists to Russia and Eastern Europe to write pro-American articles for local media outlets. A similar situation occurred in Iraq in 2005 when the US military covertly paid Iraqi newspapers to print stories written by US soldiers; these stories were geared towards enhancing the appearance of the US mission in Iraq.[3] …

Domestically during the Vietnam War, the Pentagon exaggerated communist threats to the United States in order to gain more public support for an increasingly bloody war. This was similarly seen in 2003 with the government’s embellishment of the threat and existence of weapons of mass destruction in Iraq.[5]

More recently, the US government has used perception management techniques to promote the belief that weapons of mass destruction were indeed being manufactured in Iraq, and that Iraq had aided and assisted the Al Quaeda terrorists responsible for the September 11, 2001 attacks upon the World Trade Center. These “facts” were, in part, the government’s justification for invading Iraq and beginning the war. A man named John Rendon has been very influential in creating the conditions necessary to justify the war in Iraq. Rendon’s firm, the Rendon Group, has had close ties with the US government ever since 1991, when the CIA hired the firm to help “create the conditions for the removal of Hussein from power.”[6]

Perception management includes all actions used to influence the attitudes and objective reasoning of foreign audiences and consists of Public Diplomacy, Psychological Operations (PSYOPS), Public Information, Deception and Covert Action.[7] The Department of Defense describes “perception management” as a type of psychological operation. It is supposed to be directed at foreign audiences, and involves providing or discarding information to influence their emotions, motives, and objective reasoning in a way that is favorable to the originator of the information. The main goal is to influence friends and enemies, provoking them to engage in the behavior that you want. DOD sums it up: “Perception management combines truth projection, operations security, cover and deception, and psychological operations.”[8]

The US military has demonstrated using perception management multiple times in modern warfare, even though it has proven to take a hit to its credibility among the American people. In 2002, Defense Secretary Donald H. Rumsfeld disbanded the Pentagon’s Office of Strategic Influence. This office had been organized to provide false news items to unwitting foreign journalists to influence policymakers and public sentiment abroad. The Pentagon was criticized to create and to use a perception management office to influence foreign states at the time.[9]

More recently, the DOD has continued to pursue actively a course of perception management about the Iraq War. “The Department of Defense is conscious that there is an increasingly widespread public perception that the U.S. military is becoming brutalized by the campaign in Iraq. Recognizing its vulnerability to information and media flows, the DoD has identified the information domain as its new ‘asymmetric flank.’ “[10]

The US government already has checks in place to dissuade perception management conducted by the state towards domestic populations, such as the Smith-Mundt Act of 1948, which “forbids the domestic dissemination of U.S. Government authored or developed propaganda… deliberately designed to influence public opinion or policy.”[11]

Perception management can be used as a propaganda strategy for controlling how people view political events. This practice was refined by US intelligence services as they tried to manipulate foreign populations, but it eventually made its way into domestic US politics as a tool to manipulate post-Vietnam-War-era public opinion. For example, in the early 1980s, the Reagan administration saw the “Vietnam Syndrome“—a reluctance to commit military forces abroad—as a strategic threat to its Cold War policies. This caused the administration to launch an extraordinary effort to change people’s perception of foreign events, essentially by exaggerating threats from abroad and demonizing selected foreign leaders. The strategy proved to be very successful.[12]

Beginning in the 1950s, more than 800 news and public information organizations and individuals carried out assignments to manage the public’s perception of the CIA, according to the New York Times. By the mid-80s, CIA Director William Casey had taken the practice to the next level: an organized, covert “public diplomacy” apparatus designed to sell a “new product”—Central America—while stoking fear of communism, the Sandinistas, Libyan leader Muammar Qaddafi, and anyone else considered an adversary during the Ronald Reagan presidential administration. Sometimes it involved so-called “white propaganda“, stories and op-eds secretly financed by the government. But they also went “black”, pushing false story lines, such as how the Sandinistas were actually anti-Semitic drug dealers. That campaign included altered photos and blatant disinformation dispersed by public officials as high as the president himself.[8]

Businesses shape the perceptions of the public in order to get the desired behavior and purchase patterns from consumers. The best medium for businesses to affect the perceptions of the public is through marketing. To get people to buy products, marketers must create a need and manage the perception of the public so that they feel the product will fulfill that need. This is not the same thing as manipulation, where businesses create something people don’t need, and marketers convince them that they do need it. Good perception management is to the benefit of the consumer, as it fulfills more of their needs, and to the benefit of the business, as it increases their revenue.[14] The decision making process in relation to the future is an element of business that has a great effect on the company’s future. If the company is too risky, this leads to underperformance, and a missed opportunity. If the company takes too many risks, it is likely that there will be a large amount of losses. Ultimately if this amount of risk taking leads the perception of the company to exceed the boundaries of logic and fact, the company will most likely fail based on their poor perception.[15]

The communication gaps that exist in international business can lead to misunderstandings. Perception management helps to prevent the complex emotional characteristics of communication from changing the original interpretation of the message.[16]

Perception management is a robust component in the fashion industry. Fashion stylists are responsible for providing perception management in the branding of products, and in creating the public persona of both individuals, businesses, and brands, through means of wardrobe, appearance, and communication skills.[17] As with any product, perception management influences purchasing decisions. According to one analyst, “In the external environment, the offerings of competitors, with which a customer compares a product or service will change, thus altering his perception of the best offer around. Another point is that the public opinion towards certain issues can change. This effect can reach from fashion trends to the public expectation of good corporate citizenship.” Other effects of perception management in fashion include that “a commonplace strategy to circumvent the loss of exclusivity associated with high market share is to leverage the brand by introducing new related brands. This is very efficient with fragrances or fashion brands.”[18]

Public relation firms are now offering services to celebrity clients in perception management or reputation repair. It is a new tool for public firms. It lets large firms pour huge resources to the public by website. The web helps public relations executives to reach out the news media and it offer ways to link the public relations people and news media. For example, firms provide direct email addresses of some business journalists.[19] A new trend in perception management is athletes signing with major public relation firms. Well-known agencies, such as William Morris and competitor Creative Artists Agency, recently started attracting huge sports stars. Alex Rodriguez joined the company after his alleged affair with Madonna, during the summer of 2008. He is following in the footsteps of Serena Williams, Kevin Garnett, and Vince Young, who are all represented by the William Morris agency (and who really need it, Garnett being excepted).[20]

Typical counter-terrorism (CT) thinking focuses on the violence, or its associated threat, to identify and exploit associated avenues for meaningful response and reaction.[22]

“Perception management”—also known as “public diplomacy“—is a propaganda strategy for controlling how a target population views political events. For example, US President George W. Bush has misled the public about a policy in order to “protect” the American public. After the Vietnam-War era the administration launched an extraordinary effort to influence how the American people perceived overseas events, essentially by exaggerating threats from abroad and demonizing selected foreign leaders.[23] In the years of the Reagan/Bush administration the government saw a lot of reluctance to commit military forces abroad. They used many tactics to change the outlook of peoples’ thoughts about oversea issues. Warfare experts from the CIA and the Army Special Forces were included in this plan. They accomplished this by pushing issues about the events in South America and Leftist right issues in Nicaragua and Afghanistan.[24]

The US military had been accused of manipulating the media in Iraq in order to achieve their pro-war goals, by secretly paying Iraqi journalists to publish stories written by US soldiers. According to the article “The Man Who Sold The War” by James Bamford in the recent edition of Rolling Stone magazine, John Rendon and his Rendon Group, the leader in strategic field of perception management, was awarded 16 million contract from the Pentagon “to target Iraq and other adversaries with propaganda.[25]

“A wind of death may become the harbinger of destruction”

The Chinese government had been controlling media to exercise “mind control” and manipulate public opinion on its citizens. All Chinese media, including newspapers, periodicals, news agencies, TV stations, broadcasting, the movie industry and art performances, are categorized and managed as “mouthpieces” of the ruling Communist Party.[26]

“Mind control” includes “indoctrination from kindergarten to college through officially compiled textbooks, as all teachers are categorized as ‘educators of CCP’ (The Chinese Communist Party)”. According to Qinglian He, a former Chinese government propagandist and now a senior researcher at Human Rights in China, by exercising “mind control”, the Chinese government has misled the Chinese population from the values of human rights and democracy, and also from the truth.[27]

The objective of this seedling project is to investigate the feasibility of enhancing the quality of human decision-making in complex and uncertain situations and under time pressure. The specific focus is to characterize the principles underlying the augmented cognition systems and to develop techniques that alleviate natural human attentional limitations in the management of uncertainty using dynamic visualization techniques.[28]

Previous Article
IG Farben, the Origin of Tabun Nerve Gas & the D-Day that Might Have Been
Next Article
Neo-Nazi/AZ GOP Connection Exposed through Racist Anti-Immigrant Law 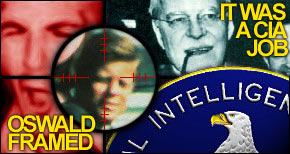